Posted on February 05, 2019 by Charlotte Albright

When student planners began working on this year’s Winter Carnival, they quickly latched on to Dartmouth’s big birthday celebration that’s now underway. The theme they chose for the Feb 7-10 festival is “Ice Age: 250 Years of Winter.”

“We’ve been here for 250 winters—you could call it our own ice age,” says Colton Wagner ’21, who co-chairs the event with Miranda Worl ’19 and Mychaela Anderson ’20. And, says Wagner, for those who want to see what Dartmouth has looked like in winters gone by, there will be an historic photo exhibit in the lobby of Dartmouth Library’s Rauner Special Collections Library.

Another inspiration for the theme: Ice Age the movie, the 2002 animation set in a prehistoric world that’s starting to freeze over, in which a sloth, a wooly mammoth, and saber-toothed tiger brave frigid weather to return a human child to its father. 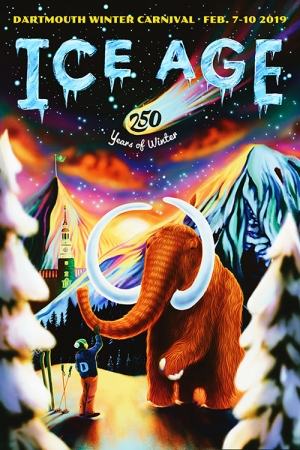 “If you want to associate this year’s carnival with the movie, that’s perfectly fine, but the main focus is the 250 years of winter we’ve had here on campus,” says Wagner.

The film did inspire a new event this year: a campus-wide scavenger hunt. In Ice Age, a saber-toothed squirrel named Scrat searches high and low for a place to bury his acorn. Organizers are now busily squirreling away two kinds of acorns around campus. Students who find a plastic acorn with a brightly colored cap during carnival weekend can return it to the Collis information desk for a range of special prizes. One of 60 golden acorns can be exchanged at the Collis Information desk for a free Winter Carnival laptop sticker.

On Wagner’s long to-do list: organizing the annual human dogsled race and the ice sculpture contest on the Green. (Contestants must attend a carving training session at 4 p.m. Thursday.) Volunteers are chipping away at the big snow sculpture in the center of the Green. David Pack, associate director of student involvement at the Collis Center for Student Involvement, predicts it will take shape either as a wooly mammoth or—plan B—a melting iceberg, depending on what the weather brings.

“Even if temperatures warm up early in the week, we expect there’ll be plenty of snow—and probably ice—for the weekend,” says Pack.

Speaking of ice, Associate Professor of Earth Science Meredith Kelly will be doing just that as the guest speaker at the opening ceremonies beginning at 6 p.m. on Thursday at Collis Common Ground. Kelly has studied glaciers all over the world, including field research at Occom Pond, which, she says, “has been in existence since the last ice sheet.”

Occom is likely to feel pretty icy to anyone who braves the polar bear swim, organized this year by Anderson. Worl says she might take the plunge. “As a senior, I’m feeling the pressure,” she says. She’s especially happy to be on the carnival council because her father, a Dartmouth alumnus, also loved the yearly celebration.

For student leaders, directing the jam-packed winter carnival is an important learning experience, says Anna Hall, director of student involvement at the Collis Center. “You have to be creative but also learn what it takes to plan an event that’s important to Dartmouth. We’re here to support them in making this all happen.”