A Renovated and Expanded Hood Museum Opens Its Doors

Posted on January 28, 2019 by Hannah Silverstein

Over the weekend, the community had its first chance to explore the new museum.

The wait is over. This past weekend, after more than seven years of planning and three years of construction, Dartmouth celebrated the dedication of the expanded Hood Museum of Art — and opened its doors to the public.

“Today the Hood once again commits to sharing its art generously,” John Stomberg, the Virginia Rice Kelsey 1961s Director of the Hood, told a standing-room only crowd of 350 friends and contributors to the $50 million project at the formal dedication ceremony in Alumni Hall on Friday afternoon.

Every detail in the revitalized museum was gleaming for its opening days. In the Russo Atrium (accessible through the prominent new entrance facing the Green on Wheelock Street and through a connection with the cafe in the Hopkins Center for the Arts), visitors are welcomed by an expansive vaulted ceiling and views into the two halves of what Stomberg calls “the museum’s beating heart.” These are the Bernstein Center for Object Study, where students and faculty can engage with objects from the collection in three state-of-the-art-classrooms; and the galleries themselves, to which the museum has added 50 percent more space.

From the atrium, museum-goers enter through the Kaish Gallery, where they are met by Our Journey, an enormous four-panel painting by Nigerian artist Obiora Udechukwu; May Stevens’ politically charged 1968 painting Big Daddy Paper Doll; and a number of other contemporary, international, and socially conscious works that Stomberg says “immediately set the tone” for the museum.

“It says we’re global, it says we have great respect for artists around the world, and that we’re interested not just in the name of the artists, but in the actual art itself,” Stomberg says.

Also on the museum’s first level, visitors will find a student-curated exhibition of photographs acquired by students in several generations of the popular course “Museum Collecting 101”; exhibitions of Japanese prints and African art; and an installation of ancient and premodern art, featuring the six Assyrian reliefs from the palace of Ashurnasirpal II, a centerpiece of the Hood’s collection of more than 65,000 objects.

Architects Billie Tsien and Tod Williams say their vision for the Hood was “the knitting together of spaces,” not simply of the original museum imagined by Charles Moore with the modern new building—achieved by subtle details such as the orientation of the lighting and oak flooring and the shift from oak baseboards in the original building to aluminum in the new—but of materials. The variegations in the off-white external brick, in the grays of the Russo Atrium’s marble floors, and in the oak of the gallery floor are details that Stomberg says “sound really boring, but what it does is it activates the whole space—your brain is getting excited visually, just by the surroundings.” 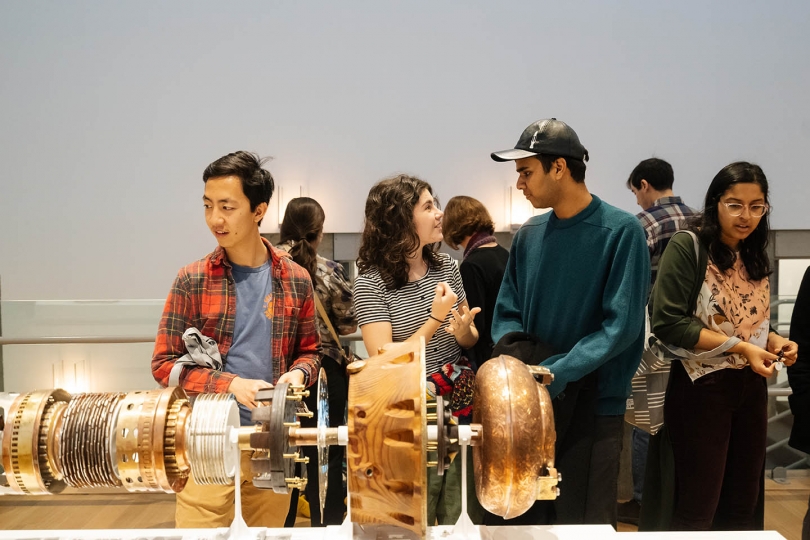 Friday’s dedication ceremony opened with an introduction from Provost Joseph Helble, who spoke of the Hood in the context of Dartmouth’s teaching and learning mission.

“I personally see the Hood as a laboratory, a place for experimentation, innovation, and creative tinkering—a place not just for art and for students of art, but a place where we truly break down the traditional barriers that exist between disciplines,” Helble said.

Helble also noted that on the new front door of the Hood is “a land acknowledgement that reads: ‘The Hood Museum of Art is situated upon the ancestral and unceded lands of the Abenaki people.’ This acknowledgment reminds us of the significance of place, the continued existence of Indigenous peoples in the museum, and Dartmouth’s commitment to building respectful relationships with those who call these lands home today.”

Arthur Hanchett, a council member of the Koasek Band of the Sovereign Abenaki Nation, called the land acknowledgement “a well-received statement. The sentiment attests a commitment everlasting that Dartmouth thrives upon the land of the Abenaki people.”

Calling the museum project “the first manifestation of the Call to Lead Campaign,” Chair of the Board of Trustees Laurel Richie ’81 formally accepted “the reimagined Hood Museum of Art on behalf of all of Dartmouth.”

“I walked into the Hood the other day from the Green, and I will say, as I entered through the front door, I got a little emotional,” Richie said. “I admit that I was filled with an incredible sense of pride on behalf of Dartmouth.”

President Philip J. Hanlon ’77 thanked the many members of the community who contributed to the project, singling out the family—several of whom were present—of the museum’s namesake, the late Harvey Hood, Class of 1918. “To all members of the Hood family, we cannot thank you enough for your enduring legacy and all you’ve done and continue to do for Dartmouth,” President Hanlon said. 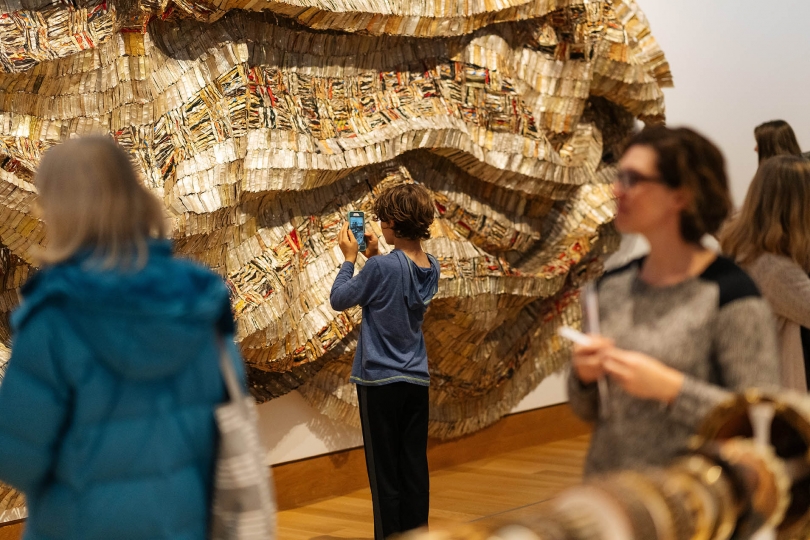 A community member gets a close-up of “Hovor,” a sculpture by Ghanaian artist El Anatsui made of aluminum bottle tops and copper wire. (Photo by Eli Burakian ’00)

At the reception immediately following Friday’s dedication ceremony, and all day on Saturday, visitors had a chance to explore the museum’s new galleries, speak with Stomberg and the Hood’s curatorial staff, and ask questions of architects Tsien and Willams, who were on hand during the weekend.

A single-day record 2,165 visitors attended Saturday’s open house, which was free and open to the public. Among them was Thomas Knight ’22, from Cooperstown, N.Y. “It’s just been such a presence in our lives, seeing those fences up and seeing it in process for so long,” Knight said of the construction project that has been ongoing since before he matriculated this fall. “When I first visited Dartmouth it wasn’t open, so it just wasn’t a dimension I was aware of. But now it’s open, and the collection is so incredible.”

He was struck, in particular, by one of the museum’s more famous paintings: Pablo Picasso’s Guitar on a Table, which is now on view in an installation of transatlantic art in the second-floor Citrin Gallery. “The provenance of this is insane—it’s from Gertrude Stein’s collection! What a cool intersection of visionaries—Picasso and Stein—and now it’s in our museum. That’s really cool.”

In the galleries, community members were delighted to find old friends like Picasso’s Guitar, Paul Sample’s Beaver Meadow, Mark Rothko’s Lilac and Orange Over Ivory, and Perugino’s Virgin and Child with Saints—at home and revitalized in their new and refurbished contexts.

Nancy Crumbine, a visiting associate professor who has taught first-year writing at the College for 40 years, says she has been bringing students to the museum for years, working with Kathy Hart, the Barbara C. and Harvey P. Hood 1918 Curator of Academic Programming, to build writing assignments based on looking closely at works of art.

“I’ve really missed working with Kathy while the museum’s been closed, so I’m delighted that it’s open again,” Crumbine says. She’s also delighted with the new space. “The old study space was so confined, it limited what Kathy could do for my students. So this is really terrific.”

“This” is the Bernstein Center, which now can accommodate three classes at time—up to 6,000 student visits a year—and fit almost any work in the collection through the study rooms’ 12-foot doors.

“I’ve seen students have real breakthroughs in their writing after a visit here, and this new facility will allow that to happen much more easily,” Crumbine says.

Associate Curator of Academic Programming Amelia Kahl ’01 says the Bernstein Center, which has been open since the start of winter term, has “already had classes from a range of different departments and disciplines come in and use the spaces. It’s been wonderful to see how these spaces facilitate meaningful and exciting engagements with works of art.”

For example, Kahl says, a recent art history class used the center to view José Clemente Orozco’s sketches for his mural The Epic of American Civilization, painted on the walls of the reserve reading room in Dartmouth Library’s Baker Library. “We can use the tech in the room to show the Orozco mural on the screen so that they can place those sketches where they would be, before and after actually going to see the Orozco across campus. It really helps them situate those sketches in their contexts,” she says.

And now the museum begins the business of becoming part of everyday campus life again. Regular hours are Wednesday, 11 a.m.-5 p.m., Thursday-Friday, 11 a.m.-8:00 p.m., and Saturday-Sunday, 11 a.m.-5 p.m. The museum will be closed on Mondays and Tuesdays. Admission is free and open to the public.

“The Hood Museum believes that great art changes lives,” Stomberg says. “We look forward to sharing that art with you now.”

View video coverage of the Jan. 25 dedication ceremony and a conversation with architects Williams and Tsien. 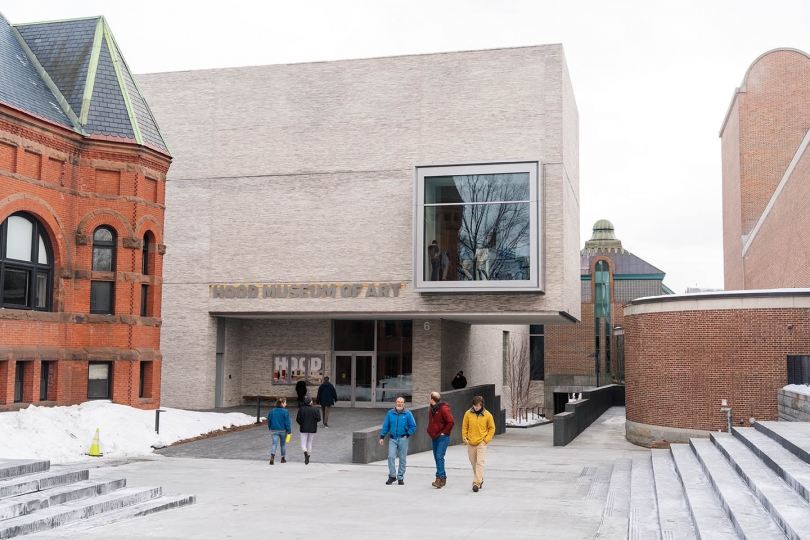 The new entrance of the Hood Museum of Art from Wheelock Street. (Photo by Eli Burakian ’00)