Playing violent video games is associated with increases in physical aggression over time in children and teens, according to a Dartmouth analysis of 24 studies from around the world involving more than 17,000 participants.

The Dartmouth analysis, published in the Proceedings of the National Academy of Sciences (PNAS), analyzed a broad range of existing literature on how violent video game play affected changes in real-world aggression over time. Although most researchers on the subject agree that playing violent video games appears to increase physical aggression, a vocal minority continues to dispute this, the researchers wrote.

“Although no single research project is definitive, our research aims to provide the most current and compelling responses to key criticisms on this topic. Based on our findings, we feel it is clear that violent video game play is associated with subsequent increases in physical aggression,” says lead author Jay Hull, the Dartmouth Professor of Psychological and Brain Sciences and associate dean of faculty for the social sciences. 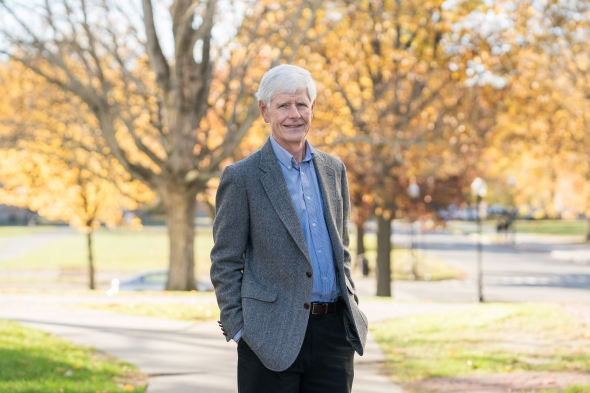 Lead author Jay Hull is the Dartmouth Professor of Psychological and Brain Sciences and associate dean of faculty for the social sciences. (Photo by Eli Burakian ’00)

The researchers in the studies analyzed by the Dartmouth team tracked physical aggression among users of violent video games for periods ranging from three months to four years. Examples of physical aggression included incidents such as hitting someone or being sent to the school principal’s office for fighting, and were based on reports from children, parents, teachers, and peers.

The study also reports that this effect appears to differ significantly among ethnic groups: The largest effect was observed among white participants, with some effect noted among Asians and no effect observed among Hispanics.

“The most notable critic of the violent video game aggression literature conducted studies in primarily Hispanic populations and found no evidence of this association. If all of my studies showed null findings, I, too, would be skeptical,” says co-author James Sargent, the Scott M. and Lisa G. Stuart Professor of Pediatric Oncology at the Geisel School of Medicine and director of the C. Everett Koop Institute at Dartmouth.

“I hope our findings prompt skeptics to reevaluate their position, especially since some of our other research indicates that violent video game play may increase deviance with implications for multiple risk behaviors,” Sargent says.

The study builds on Hull and Sargent’s body of work investigating the impact of video games on children’s behavior, including the link between mature-rated, risk-glorifying video games and deviant behavior (e.g., smoking, drinking, and risky sex) and the association between playing this type of video games and reckless driving among teens.

Anna Prescott, a senior evaluation and research analyst in career and education outreach at the Vermont Student Assistance Corporation, who was a graduate student in psychological and brain sciences at the time of the study, also served as a co-author of the research. Prescott was also an author in some of Hull and Sargent’s earlier video game research.

Amy Olson can be reached at Amy.D.Olson@dartmouth.edu.