No-Till Agriculture Catching On at the Organic Farm

At Dartmouth’s Organic Farm, a field lined with neat rows of raised plant beds catches the eye. The beds are a recent feature at the farm, handcrafted for a new initiative: no-till agriculture.

As the name suggests, the method avoids mechanical tilling, which involves the use of tools or machines to turn over and break up soil before cultivation. This sort of tilling comes with its share of undesirable side effects, for both the farmland and the whole environment, as the process is said to disturb natural decomposers like fungi and bacteria, destroy soil structure over time, and contribute to soil erosion globally. What's more, during tilling, carbon dioxide trapped in the soil is released into the atmosphere, adding to the problem of carbon emissions.

These factors have driven a steady rise of interest in no-till techniques. While no-till farming is not a new idea, it is one that is increasingly taking hold in small, organic farm circles and farm communities as a way of creating healthier soils, says Laura Braasch, who manages programs and operations at the Dartmouth Organic Farm.

With help from student groups, Braasch spearheaded the transition of the half-acre field to a no-till system. She researched the method thoroughly, picking and choosing aspects of no-till systems that best suited the farm. The beds were measured, dug, and shaped by Braasch and student volunteers from the Farm Club—a Dartmouth Outdoors Club where student farmers meet and learn how to get involved at the farm—working daily for over a month this spring. “Even though it is a decent amount of effort to convert to a no-till system, in the long run, it will actually be less effort because we won’t be actively tilling our field every season,” says Ethan Smith ’20, an engineering major and Farm Club student who has helped plan and implement the initiative.

Why make these beds at all? Some farms don’t use them, but in a northern climate they are important, says Braasch, because the beds are able to warm up faster in the spring and be ready for planting earlier, thereby extending the growing season. They afford another advantage: To create raised beds, the top soil that covered the now-sunken walking paths between the beds was heaped on top of the beds, making a double layer of nutrient-rich soil available to the growing plants.

“It seems things are going pretty well,” says Sophie Neuhaus ’20, another Farm Club student involved in the project. “Hopefully, if this works really well, it will be a model for other small farms in the area,” she adds.

A few beds at the far end of the field continue to be tilled, to allow comparison and assessment of no-till farming over time. “We’re going to take soil samples each year and compare soils for organic matter and nutrients, while also evaluating how our plants do visibly,” says Braasch. “It’ll be interesting to see what that says in the coming years.” 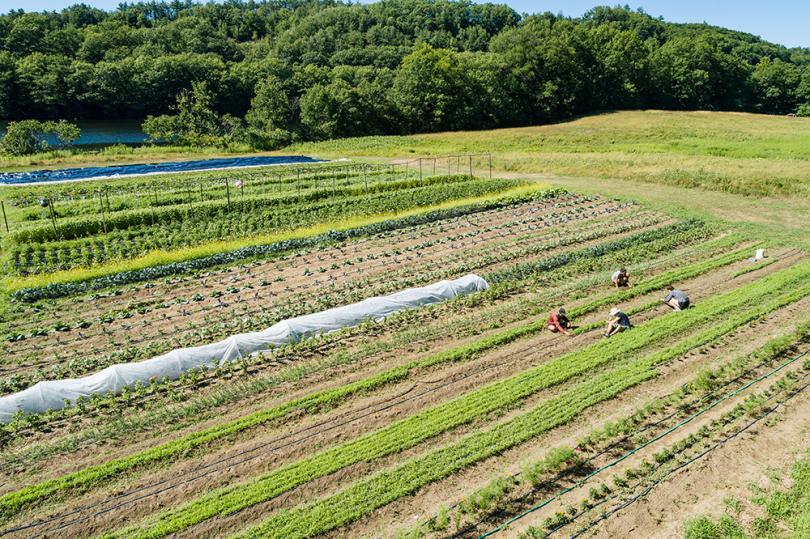 From left, Ralf Carestia ’18, Michael Kellman ’20, Gillian D’Acierno ’18, and Alexa Wing ’20 work in a field that has been carefully prepared using the no-till method. (Photo by Eli Burakian ’00)