At Sunday’s commencement on the Green, Emmy-nominated writer, actor, producer, and comedy star Mindy Kaling ’01 urged members of the graduating class to be their own champions.

“I’m giving you permission to root for yourself,” said Kaling, who is best known for her roles in The Office and The Mindy Project. “And while you’re at it, root for those around you, too. It took me a long time to realize that success isn’t a zero-sum game.”

It was a beautiful morning—clear, warm, and sunny—as a crowd of 12,000 parents, family, and friends gathered to celebrate the Class of 2018. President Phil Hanlon ’77 conferred 1,972 bachelor’s, master’s, and doctoral degrees in undergraduate and graduate programs from the Geisel School of Medicine, Guarini School of Graduate and Advanced Studies, Thayer School of Engineering, and the Tuck School of Business.

In her address, Kaling took lighthearted aim at, among other things, Dr. Seuss (aka Theodor Geisel ’25), the New Hampshire state motto, Dartmouth’s new logo, and the general forgettability of graduation speeches.

“Madeline Albright was my commencement speaker, and while I don’t remember any specific quotes she said, or even a general gist of what she was talking about, I do remember thinking: ‘I wonder what it will be like to have my own cell phone?’ How things have changed.” 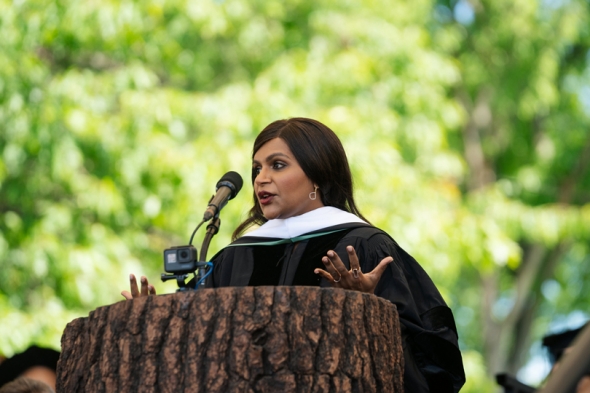 But Kaling’s underlying message to graduates was in earnest: Believe in yourself and one another.

Speaking specifically to the women of the Class of 2018, she said, “Hey girls, we need to do a better job of supporting each other. I know I’m guilty of it too. We live in a world where it seems like there’s only room for one of us at the table. So when another woman shows up, we think, ‘Oh my god, she’s going to take the one woman spot! That was supposed to be mine!’ But that’s just what certain men want us to do! Wouldn’t it be better if we worked together to dismantle a system that makes us feel like there’s limited room for us? Because when women work together, we can accomplish anything.”

She concluded with words of encouragement for everyone. “I’ve covered a lot of ground today, not all of it serious, but I wanted to leave you with this: I was not someone who should have the life I have now, and yet I do. I was sitting in the chair you are literally sitting in right now and I just whispered, ‘Why not me?’ And I kept whispering that to myself for 17 years, and here I am, someone this school deemed worthy enough to speak to you at your commencement.

“Don’t let anyone tell you you can’t do something, but especially not yourself. Go conquer the world. Just remember this: Why not you? You’ve made it this far.”

In his address, President Hanlon urged the graduates to look to the example of this year’s honorary degree recipients, each of whom, he said, “has embraced their global citizenship as both a gift and a responsibility.” 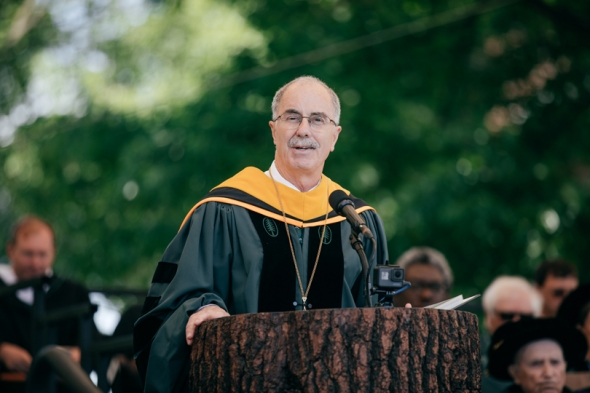 He continued: “As you leave Dartmouth today, remember the lessons you’ve learned through your global engagements, and take inspiration from today’s honorary degree recipients. Understand the importance of cultural awareness and humility. Recognize the rich pool of talent that exists across the globe, and harness the power of partnership in your work. Remember that better solutions arise when diverse perspectives are applied to the complex challenges you’ll face.”

When valedictorian Nicholas Norwitz ’18, a biology major from Newton, Mass., told the crowd, “Coming to Dartmouth was one of the best decisions I ever made,” it was evident from his classmates’ applause that he wasn’t alone in that sentiment.

Speaking on the theme of making good decisions, Nortwitz said, “You need to be given the opportunities to make those decisions. That’s the real privilege of being at an elite Ivy league school like Dartmouth: It opens doors you never knew existed and provides opportunities that you could only dream of.” 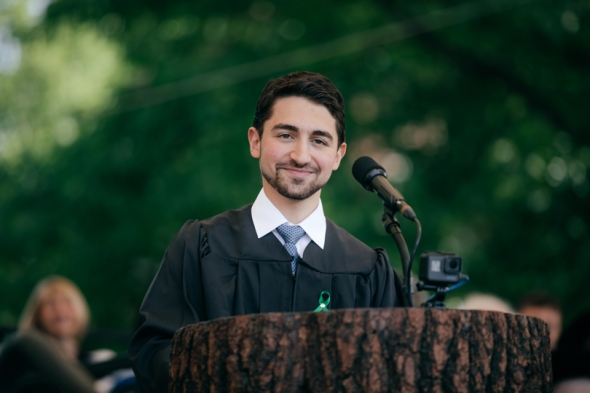 Norwitz is one of four undergraduate valedictorians, recognized for having earned a 4.0 grade-point average. The others are Hae Lin Cho ’17, Katherine Clayton ’18, and Jean Zhou ’18.

(See the video of Nicholas Norwitz’s commencement speech and read about this year’s valedictorians and salutatorians.)

Hanlon conferred honorary degrees on Kaling and five other recipients. They are:

Sunday’s ceremony began with an academic procession to the Green led by bagpiper Joshua Marks ’96 and featured music throughout by the Dartmouth College Wind Ensemble and the Dartmouth College Glee Club. Brooke Hadley ’18, president of Native Americans at Dartmouth, welcomed attendees to the day’s formal proceedings.

“We gather here today on these historic grounds, the original homeland of the Abenaki people, to celebrate the 248th year of the college founded for the education of Native youth,” Hadley said. She briefly outlined the history of Native American students at Dartmouth, noting that since Dartmouth rededicated itself to its original charter in the 1970s, it has “matriculated almost 1,000 Native American students—more than all of the other Ivy Leagues combined.”

“Students today have shown that our culture and continuity as indigenous people has strengthened us,” Hadley said. “It is this diversity of thought and background which truly makes Dartmouth unique.”

The three-hour commencement ended with students, guests, faculty, and staff shaking Kaling’s hand as she and Hanlon led the honorary degree recipients and faculty from the Green. Kaling lingered in front of the Hopkins Center for the Arts as eager fans asked her to pose for selfies, hugged her, and thanked her for returning to Dartmouth. 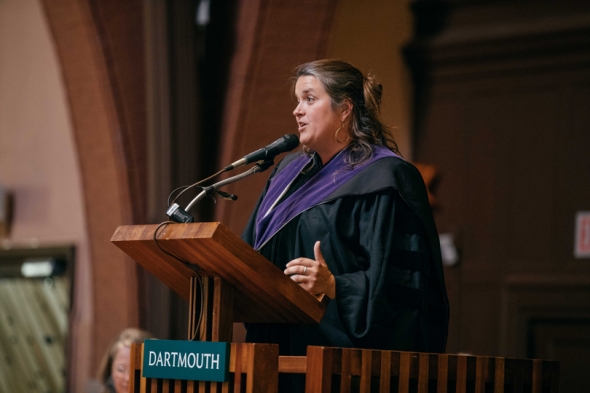 The rest of the weekend was also filled with events, including, on Saturday, a multifaith baccalaureate service where immigration attorney Allegra Love ’03 spoke to the graduating class and their families. Love directs the Santa Fe Dreamers Project in Santa Fe, N.M., which provides free legal representation to New Mexico’s immigrant community. Saturday also saw investiture ceremonies at the Geisel School of Medicine, the Guarini School of Graduate and Advanced Studies, Thayer School of Engineering, and the Tuck School of Business.