“You honor us by your dedication and commitment,” President Emeritus James Wright told eight Dartmouth seniors who have pledged to serve their country in the U.S. military after graduation.

“As you have learned well, over the last four years, Dartmouth is an institution that is enriched by its traditions. Among these, and one that I regularly encouraged, is a tradition of service,” said Wright, a U.S. Marine Corps veteran who has spent his career advocating for veterans at Dartmouth and nationally. He spoke at the commissioning ceremony of four Army ROTC cadets in Moore Theater on Saturday, a day before the College’s commencement.

More than 100 family members, friends, and faculty attended. Also present were Dartmouth trustees James Jackson, John Replogle ’88, and board Chair Laurel Richie ’81. They witnessed the commissioning of four graduating seniors as second lieutenants in the U.S. Army and celebrated four more inductees whose commissions are pending their completion of additional officer training in the coming months.

The officers who completed their training at Dartmouth:

Also recognized were four undergraduates who will receive commissions as second lieutenants after additional training:

At the start of the ceremony, the eight graduates marched to center stage, where they were greeted by Dean of the College Rebecca Biron.

“These graduates join the ranks of generations of alumni who have made the profound commitment to serve their country. We couldn’t be more proud of their courage and dedication,” Biron said before turning the proceedings over to U.S. Army Capt. Susan Redwine, director of the Dartmouth ROTC program.

Redwine addressed the commissioning cadets, who stood at attention in full dress uniforms at center stage alongside the four graduates who will commission after additional training. She called the cadets’ “attention to orders” as she read the commissioning warrant signed by Secretary of the Army Mark Esper. She then invited the officers chosen by each cadet to the stage to administer the oath of service.

Second Lt. Jeffrey Jones administered the oath to his sister, Jessica. A member of the California National Guard and an ROTC graduate from Santa Clara University, Jeffrey Jones came to Hanover to administer the oath and see his sister graduate.

Army Capt. Mathieu Philie administered the oath to his sister, Morgan. Mathieu Philie, a battalion aviation officer for the 7th Special Forces Group based in Eglin Air Force Base, Fla., arranged leave to attend the ceremony.

Redwine then invited the newly commissioned officers’ families onto the stage to pin the insignia of their rank to their shoulders, followed by the traditional first salute, given by U.S. Air Force Senior Master Sgt. Ian Short, an instructor in Dartmouth’s ROTC program.

Dating to 1792, the tradition holds that new officers receive their first salute from an enlisted soldier, acknowledging the respect due their new rank. For more than 200 years, the new officers have responded by shaking the hand and passing a silver dollar to the person who saluted them.

Wright celebrated the new officers and offered a reminiscence of his own time as a Marine. Achieving the rank of lance corporal when he was released from active duty some 60 years ago, Wright said he remains a bit uncomfortable in the presence of officers.

“And now I look around and see that I am literally surrounded—they are all over this platform and in fact their numbers are increasing right before our eyes. But today any feeling of discomfort is lessened by a tremendous sense of gratitude and respect,” he said.

“This old Dartmouth man is proud of you. This old Marine salutes you.”

More on the four commissioned officers: 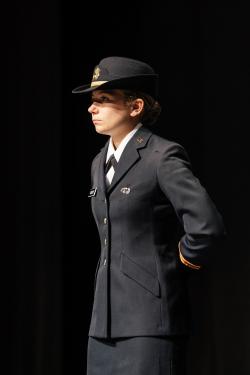 Morgan Corley ’18, a history and Spanish double major, grew up in San Francisco and matriculated at Dartmouth in the fall of 2014 and in the Army ROTC program. Throughout her time at Dartmouth, she has worked as a residential life undergraduate advisor (UGA), served on the Committee on Standards, been academic chair for her sorority, Chi Delta, won the Class of 1866 Award for Oratory, and studied abroad in Santander, Spain. After graduation, Corley will serve as an active duty field artillery officer. 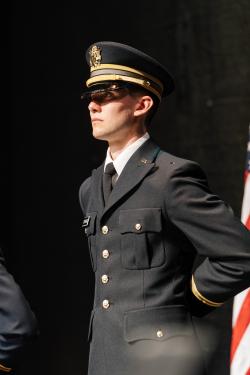 Kyle Dotterrer ’18, a computer science major with a statistics minor, grew up in Traverse City, Mich., with his parents Robert and Jean and twin sister, Devon. He attended Central High School, where he excelled athletically and academically, graduating as valedictorian. He entered Dartmouth in the fall of 2014 and joined the Army ROTC program during the winter of his sophomore year. Throughout his time at Dartmouth, he competed for the Big Green in cross country and track and field, serving as captain of both teams as a senior. Upon graduation, he will serve as an Army cyber officer.

Jessica Jones ’18, a geography major and international studies minor, grew up near Sacramento, Calif. She attended Stevenson High School, graduating as valedictorian in 2014, and was awarded a four-year national ROTC scholarship to attend Dartmouth. While at Dartmouth, Jones has been a player and two-year captain of the women’s club water polo team. Her interest in climate change led her to conduct research with the hydroclimatology group at Dartmouth. After graduation, she will serve as an active duty Medical Service Corps officer, joining the 65th Medical Brigade in South Korea.

Morgan Philie ’18 grew up in West Friendship, Md., with her parents, Mike and Marianne, and her brother, Mathieu. She played sports from a young age and found her passion in field hockey. She was recruited to Dartmouth’s field hockey program and received a four-year scholarship with Dartmouth’s Army ROTC program, enrolling in the fall of 2014. Philie majored in computer science, modified with geography, and focused on geographic information systems. In addition to her ROTC training, she gained leadership experience as a two-year field hockey captain. In 2017, she was selected as a Class of 1948 Scholar-Athlete Award recipient, an award given to “one male and one female of the junior class who have combined outstanding performance in athletics and significant achievement in academics.” After graduation, she will work as a computer analyst for a government defense agency outside Washington, D.C.