When she was 7, Tina Rutnik told her younger sister and cousin she wanted to be a senator, not understanding what that really meant. In high school, saying she wanted to be a lawyer sounded more reasonable, less “presumptuous for a girl,” she would later recall. 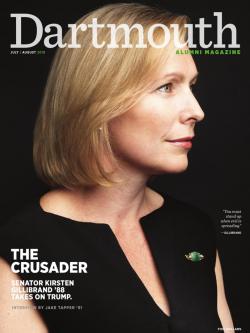 After Dartmouth, where she majored in Asian studies, played squash, and joined Kappa Kappa Gamma, she graduated from UCLA’s law school and joined the prestigious Manhattan law firm Davis Polk & Wardwell in 1991. (She also dropped her childhood nickname and became Kirsten.) She took a leave the following year to clerk for the U.S. Court of Appeals in Albany, New York, and then returned to Davis Polk.

A pivotal moment came in 1995, when First Lady Hillary Clinton addressed the UN’s Conference on Women and declared, “Human rights are women’s rights, and women’s rights are human rights.” Something clicked for the young attorney, and an “unfiltered childhood sense of self came rushing back,” she wrote in her 2014 memoir, Off the Sidelines: Raise Your Voice, Change the World.

Rutnik got involved in Democratic Party politics, working for then U.S. Housing and Urban Development Secretary Andrew Cuomo (now governor of New York) and Clinton’s 2000 U.S. Senate campaign. The next year she married venture capitalist Jonathan Gillibrand and moved back to Albany to run against Rep. John Sweeney, R-N.Y., in 2006. She won, but her time in the House was brief: In January 2009 Gov. David Paterson appointed her to Clinton’s Senate seat after President Obama picked Gillibrand’s former mentor to be secretary of state. In 2010 Gillibrand won the seat handily. In 2012 she won reelection with 72 percent of the vote, the largest victory margin for a New York candidate.

What is it like as a senator to be living in this new environment?

It’s a very intense time for everyone, especially for New Yorkers. When I travel around the state, people are anxious about the future. They’re concerned because President Trump has really attacked basic institutions. Whether he’s attacked the freedom of the press, the independence of the judiciary, or the independence of the Department of Justice, or the notion that we’re a country founded on immigrants by not protecting DACA kids, or freedom of religion with his Muslim ban, or the United States’ leadership in the world by walking away from the global climate accords, this is making people feel unsettled.