“It was intense and eye-opening,” says Sustainability Fellow Joe Fairbanks ’17.

A group of students interested in energy production and policy recently headed for West Virginia and Kentucky to learn how small Appalachian communities are weathering changes in the coal industry. The “energy immersion trip” was sponsored by the Arthur L. Irving Institute for Energy and Society in partnership with the Dartmouth Sustainability Office.

“We often talk in the energy system about local costs and national benefits, but when you see it on the ground, that’s important. It comes down to respect,” says Elizabeth Wilson, director of the Irving Institute. “Letting students learn how people make their choices, how they live, and what their values are—that’s important to understanding how our policies and technologies affect lives.”

The trip was “intense and eye-opening,” says Joe Fairbanks ’17, a sustainability office fellow who helped manage the trip. “It was really good to be part of travel that equipped future leaders with skills to solve energy problems that are very real, that you can see firsthand.”

The travelers, who blogged about their journey, spent the first week in Montgomery, W.Va., a small town struggling to replace mining jobs lost to automation and the decreasing demand for coal. “On the first day, at Morris Creek, which has been polluted by mining drainage, we saw efforts to restore aquatic life,” says Fairbanks. “We also went to a mountaintop surface mine where trees had been cut down and saw the environmental costs of extracting coal in that way.” 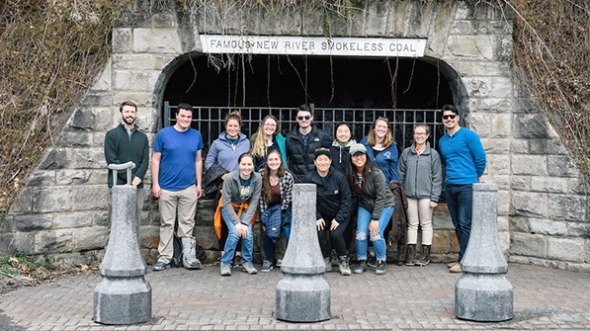 Students who spent spring break in Appalachia studying energy gather at the entrance to a historic mine in Mount Hope, W.Va. (Photo courtesy of Dartmouth Energy Trips)

On the other side of the coin, the students met pro-coal residents who made—or had made—their living in the mines. “From an environmental standpoint, a lot of people say coal is bad,” says Elena Bird ’18, who went on the trip. “But you need to recognize that we in the Northeast, and in large institutions, are the ones using the energy that’s taken from those areas. I want to at least be mindful of what those effects are in those regions.”

An earth sciences major who has interned for U.S. Rep. Ann Kuster (D-N.H.), Bird says she has been disheartened by the failure of the federal government to wean the nation from fossil fuels. But she says the trip to coal country showed that activism at the local and state levels can help build a more sustainable future.

“We saw a lot of hope in the organizations that we visited, taking different approaches—legislation, legal defense, media, education—to solving energy and economic problems.” For example, she says, Fayetteville is trying to replace lost mining jobs by boosting tourism through outdoor recreation.

“Students learned from these communities that even if we were to switch off fossil fuels tomorrow, those industries will continue to have lasting economic implications. The hope is that they come away from the trip being able to see an issue more holistically,” says Jenna Musco, assistant director of the sustainability office.

Because the aim was to introduce students to all segments of society, the jam-packed itinerary ranged from local church suppers to corporate boardrooms.

“Meeting all these executives and engineers and other decision-makers, and being welcomed at the local level, creates a responsibility to take what we’ve learned and pass it on, to convey that this region is complex, and an example of many regions that we don’t always take enough time to think about,” says Lily Zhang ’18, an engineering major.

“Dartmouth students realize that they are at the end of the transmission line, that they are implicated in the system they want to change,” says Rosalie Kerr ’98, director of the sustainability office. “We wanted them to come back all churned up.”

And this was the first of several chances for students to observe at close range the way rapid changes in energy use and production are churning up communities. A second trip, in June, will give students a look at rural energy systems in New Hampshire, Vermont, and Canada, and a third trip, possibly abroad, will be offered over next winter break.