Scholars Who TeachExplore Areas of Study at DartmouthAll News Stories

The former deputy administrator at the U.S. Agency for International Development (USAID) has sent a class of Dartmouth students into the Marvel comics universe to develop international anti-poverty plans that they are presenting to top U.S. officials in the real world.

Donald Steinberg, who is in residence at the John Sloan Dickey Center for International Understanding as the Allen Bildner Distinguished Fellow in International Affairs, is teaching the spring seminar, “The Challenge of Global Poverty: Why It Matters, What We Can Do About It.” 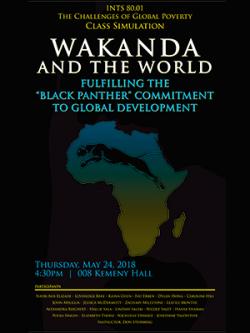 Poster for the Wakanda policy presentation by Donald Steinberg’s “challenge of global poverty” seminar.
Steinberg hit on the idea of having his students go to work for the comic-book nation of Wakanda, home of the Marvel superhero movie phenomenon Black Panther, to develop plans to use the fictional country’s vast wealth and advanced technology to spur development in the rest of Africa.

The longtime State Department and White House official, former ambassador to Angola, and specialist in African affairs described how he introduced the project. “I said, ‘I got a call last night from King T’Challa,’ and the students are looking at me like, what?”

Wakanda wants to tap its priceless mineral reserves to develop the rest of Africa, Steinberg explained. “T’Challa, a good friend from college, said, ‘I understand you’re teaching a class with some really bright kids who know international development. Would you ask them if they’d be willing to help us put together a plan?’ The students were looking at me like I’m crazy, but I just kept going. Of course, they all knew the movie, and by the end, we had four people who had volunteered to serve as Wakandan deputy ministers and the whole class was on board.”

The students will be consulting with 10 real-life international development experts and each of the four groups has presented their plan to a panel of top NGO and government officials including Brian Atwood, head of USAID under President Bill Clinton, Carla Koppell, former vice president of the U.S. Institute of Peace, and Steve Radelet, former development adviser to Secretary of State Hillary Clinton.  The students will present their results at a public program at 008 Kemeny Hall starting at 4:30 on Thursday, May 24.

At first, Dylan Hong ’19 was surprised by the idea of going to work for a Marvel comic kingdom, but his enthusiasm grew as the project developed, he says.

“Although the country’s fictional, the work we’re doing is very much based on research. For instance, I’m working on energy issues in Uganda and Tanzania, where it’s really hard to connect to the grid across the whole country,” Hong says. “Instead we’re looking at mini-grids for local communities, like micro-dams for rural areas, which are much cheaper than huge national dam projects. So, the technology is very real.”

Lindsay Salem ’18 is the deputy minister leading the group looking into using Wakanda’s priceless mineral reserves of vibranium, the fictional indestructible metal most notably used to create Captain America’s shield, to fund development in energy and infrastructure in the region. She says Steinberg’s commitment to helping his students connect with major players in the international development world for jobs and internships is very real.

Salem is interested in a career in global health, but when a potential snag in a post-graduation job came up late in her senior year, Steinberg stepped up to make sure she had other options.

“He’s been an incredible mentor over the past few weeks, helping to reassure me that, even if that does fall through, he will work with me to help find a job after graduation, which is huge,” she says.

Daniel Benjamin, the Norman E. McCulloch Jr. Director of the John Sloan Dickey Center for International Understanding, worked with Steinberg in the Clinton and Obama administrations. He says he called his former colleague last fall to ask if he would suggest someone from the policy world to teach a seminar on global poverty alleviation.

“Don has an extraordinary record of service—as deputy administrator at USAID, the top Africa policymaker at the National Security Council, ambassador to Angola, No. 2 at the International Crisis Group,” Benjamin says. “He responded, ‘How about me?’ explaining that he'd just stepped down from being CEO of World Learning. I have seldom felt luckier.”