Alumna Works at the Confluence of Art and Geography

Supported by an H. Allen Brooks Travelling Fellowship, Dalia McGill ’16 lived and worked in the Amazon River region of Brazil after graduation, where she produced a documentary, photo essay, and oral history examining the social impact of the controversial Belo Monte Dam project in the Amazon basin.

From January to April 2017 McGill, a geography and studio arts double major, lived in Altamira, a town on the banks of the Xingu River, a tributary of the Amazon. Altamira is a city of about 100,000 people that includes a community of traditional river dwellers known as ribeirinhos. There she interviewed, photographed, and participated in the community of the ribeirinhos, highlighting their stories of how relocation and changes to the river caused by the dam project is destroying their traditional way of life.

McGill says her aim was to keep a record of a community, a landscape, and an ecosystem in a time of sudden and extreme change, and to advocate for the people whose homes and livelihoods were severely affected by the project.

“The environmental and social devastation brought on by the construction of the Belo Monte Dam must be acknowledged, and understanding its impacts is pivotal in the fight against other major industrial projects in the Amazon region,” McGill writes in the introduction to her project.

Frank Magilligan, a geography professor and the Frank J. Reagan '09 Chair of Policy Studies, taught McGill in his “River Processes and Watershed Science” class and recommended her for the Brooks fellowship. Magilligan, who has focused much of his research on the effect of dams on geography and the environment, says he plans to use McGill’s work in his “Water Policy and Politics” class when he teaches his students about international development and the associated cost-benefit analyses that go into hydropower development.

“Dalia’s photos brilliantly capture the personal impacts, social costs, and the effects on local livelihoods of large-scale hydropower projects which are often overlooked in planning these large dams,” Magilligan says. 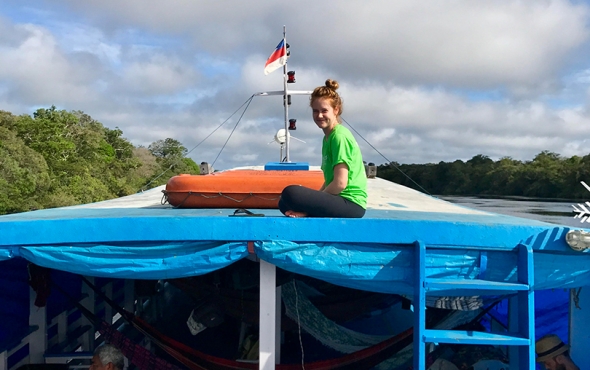 Dalia McGill ’16 in Jaú National Park, in the Amazon, near Manaus, Brazil, where she volunteered for several months after her photo project. (Photo Courtesy of Dalia McGill)

McGill says her double major in studio art and geography prepared her for the project. Working with photographer and studio art senior lecturer Virginia Beahan, whose work examines complex relationships between culture and nature, helped her develop her photographer’s eye. Beahan recommended McGill for the Brooks fellowship.

McGill says her study of geography, and particularly her classes with Magilligan, gave her ways to understand the effect of the Belo Monte Dam project that informed her documentary photography.

“Geography is just everything,” McGill says. “It is so interdisciplinary. It’s government, environmental studies, anthropology—all these things together.”

McGill’s photos, essays, and interviews, produced during her Brooks fellowship, are displayed on her website Vozes do Xingu.  She compiled some of her photos and a trailer to her video documentary for Dartmouth News:

A Visual Exploration of the Impact of Belo Monte Dam

Photos and text by Dalia McGill ’16

The Belo Monte Dam is in the final stages of construction on the Xingu River in Brazil.

The fourth-largest hydroelectric dam in the world is currently being built in the Brazilian Amazon, in the state of Pará. The construction of the Belo Monte dam on the Xingu River, a tributary of the Amazon, began in 2011 after years of vehement protests led by local and indigenous leaders.

The project has been extremely controversial due to its severe social and environmental impacts. Over 20,000 people have been displaced from their homes, and the lives of ribeirinhos and indigenous populations, who depend on the river, have been greatly affected.

The importance of the Amazon rainforest is indisputable. It is known as the “lungs of the planet” for a reason: The entire world depends on its health, and therefore, we must protect it. The environmental and social devastation brought on by the construction of the Belo Monte dam must be acknowledged and understanding its impact is pivotal in the fight against other major industrial projects in the Amazon region. 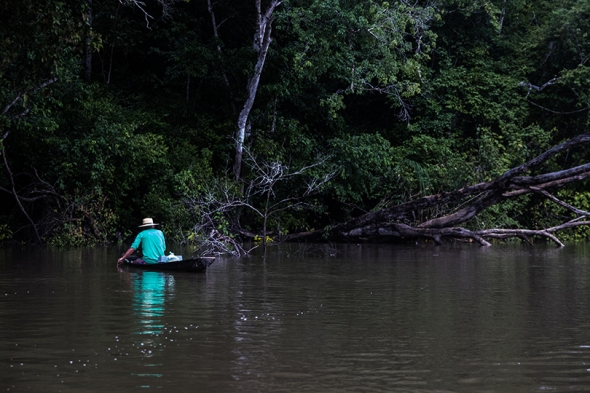 A ribeirinho boats on the Xingu River.

Ribeirinhos live off fishing and small-scale agricultural production. Many have been displaced from their homes by the flooding caused by Belo Monte Dam, and have been forced to give up their way of life. 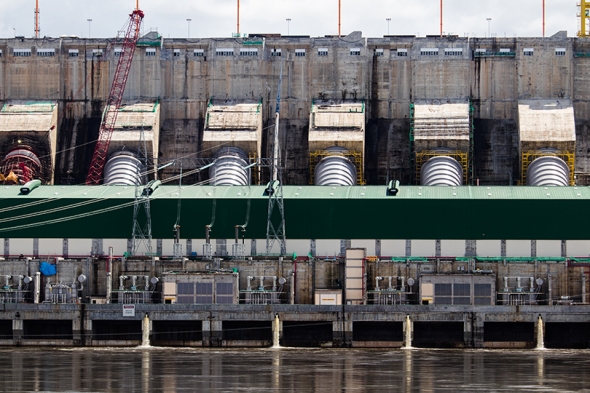 The Belo Monte Dam, in the final stages of construction, is a massive presence at the center of the complex ecological and social web around Altamira, Brazil. 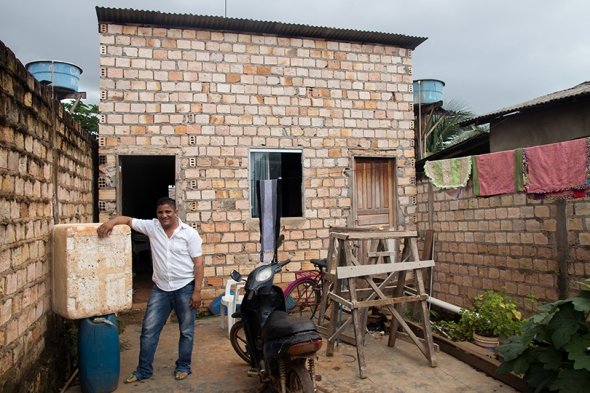 Edivaldo, a fisherman, stands outside his sister’s house in Altamira. He has lost his home and can no longer make a living from fishing. 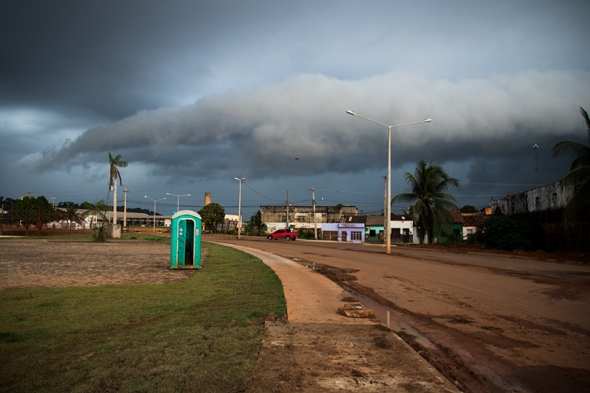 The relocation area housing families removed during construction of Parque Igarapé, part of the Basic Environmental Plan (PBA) implemented by the Brazilian government to make way for construction of Belo Monte Dam. Some residents of Altamira view the project as a “social cleansing” effort, since low-income families were removed from the center of the city and placed in the resettlements in the outskirts. 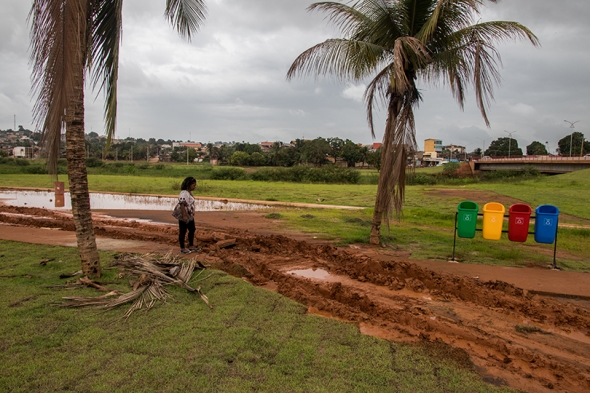 Elena, a former resident of the area that is now becoming Parque Igarapé, stands where her house used to be beside the two palm trees that she planted years ago. Today, she lives far from the center of Altamira, and believes her home was worth more than the settlement she received. 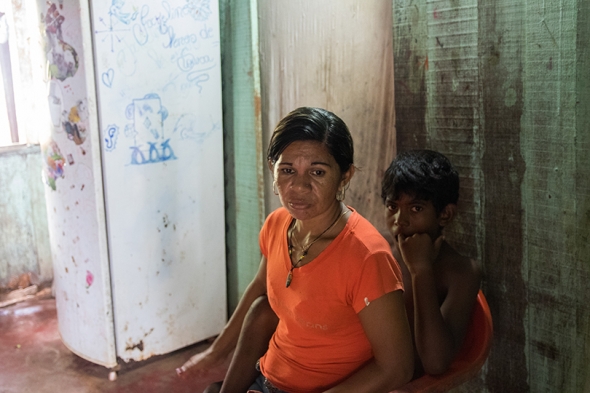 Antonia’s home is the only remaining house in her neighborhood. Her former neighbors were relocated. With no neighbors, Antonia feels unsafe and forgotten.

A central road in the Collective Urban Resettlement (RUC) of São Joaquim is lined with quickly constructed houses. Many residents of Altamira have been forced out of their homes and placed in RUCs in the outskirts of the city. For some, this has been a positive change, since they lived in precarious conditions before. However, others feel as though they were not given a fair payment for being forced from their homes, and for many of the ribeirinhos, living away from the river has not been easy. 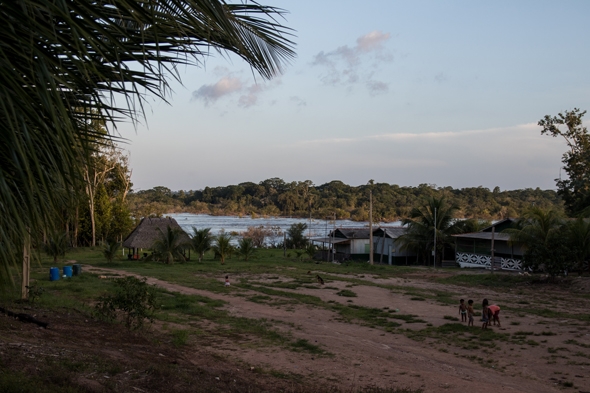 Muratu village, where the Juruna people live. The Juruna live on the Volta Grande do Xingu (Big Bend of the Xingu), an area that was hit hard by the construction of Belo Monte. 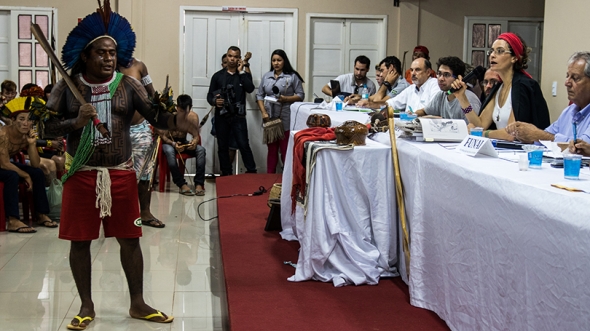 Members of the Juruna people and many others from indigenous populations of the area attend a meeting held in Altamira with representatives from FUNAI (National Foundation for Indigenous Peoples, which is the equivalent of the U.S. Bureau of Indian Affairs), the public ministry of the region, and dam construction company Norte Energia.

The Altamira meeting was one of many before a packed house of people from across the region. Since Belo Monte's arrival, indigenous peoples have been in a constant battle for their rights. 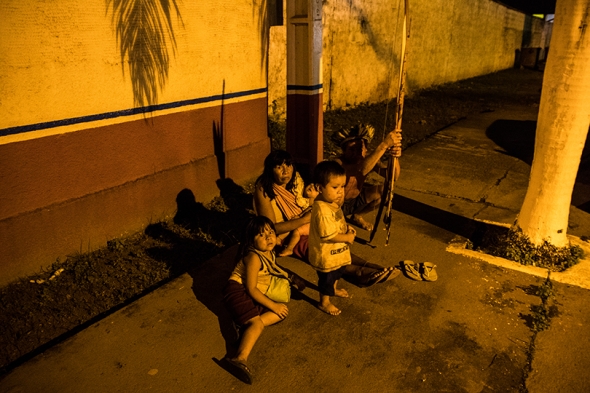 An Indigenous family living on the streets of Altamira. The construction of Belo Monte Dam has led indigenous people to come into the city often, greatly affecting their way of life. 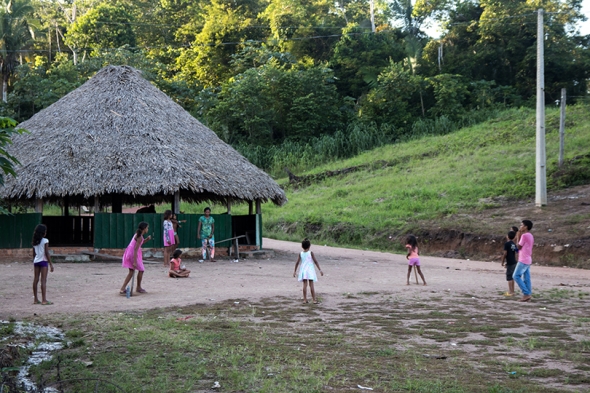 Juruna children play in Muratu village. They rarely play in the river anymore. The water is becoming polluted and the fear of a sudden rise in water level has kept them away. 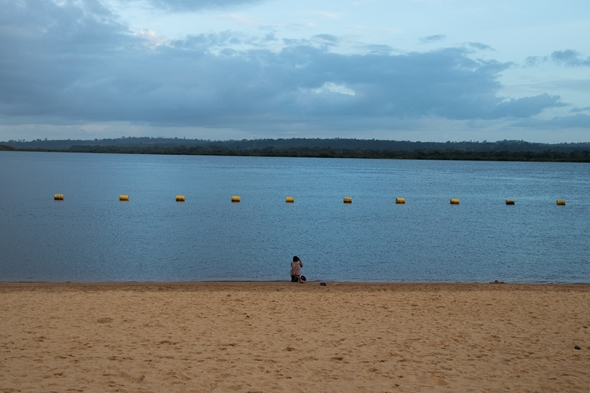 A woman looks out on the Xingu River from the artificial beach in Altamira. Since the river no longer flows as it once did, it is becoming polluted by the city’s sewage.

Trees decay on the banks of the Xingu. More than 1,500 square kilometers of Brazilian rainforest have been devastated due to the construction of Belo Monte Dam, resulting in a great loss of biodiversity. Deforestation and forest decay caused by flooding release significant amounts of greenhouse gas into the atmosphere. Equating hydropower with clean energy is a dangerous misconception.