Thayer School of Engineering Professor Jifeng Liu is within a hair’s width of doubling the efficiency of solar cells while producing them at a fraction of the cost.

Actually, he’s within one-thousandth of a hair’s width. 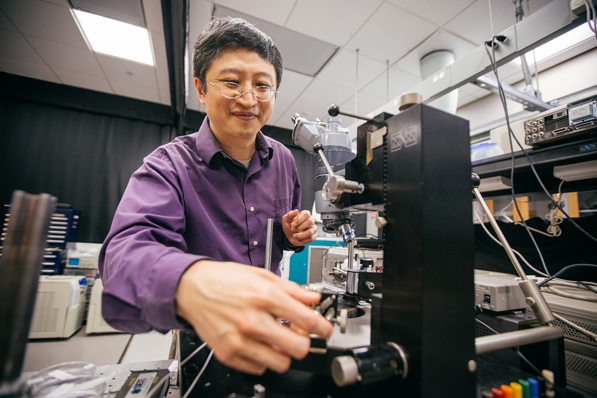 Thayer School of Engineering Professor Jifeng Liu adjusts a probe station in his lab. The device is used to test the electrical current and voltage running through an electronic device, such as a solar cell. (Photo by Robert Gill)

One of the projects Liu and his doctoral students are working on is in a field known as thin-film technology as it applies to use in solar cells. They are developing coatings with unusual properties that are measured in nanometers—a unit equal to one-millionth of a millimeter.

Liu earned his master’s degree in materials science and engineering from Tsinghua University in China in 2001, and a doctorate from the Massachusetts Institute of Technology in 2006. He was a postdoctoral associate at MIT’s Microphotonics Center until 2010, when he began at Thayer as an assistant professor.

His solar cell materials research at Thayer uses evaporation coating to deposit a very thin layer of the elements germanium and tin on to an amorphous surface such as plastic or glass. Germanium was used to create the first semiconductor transistor in the 1940s, but has since been replaced by silicon, a close neighbor on the periodic table.

The idea is to create a thin coating of this semiconductor material on inexpensive surfaces such as plastic, as a template for high efficiency solar cells, in which photons from solar light can be better harvested, generating electricity more efficiently. In the current high efficiency solar cell technology, this process requires either a single-crystal germanium or a single-crystal gallium arsenide template. This material works well, but it is expensive.

“It costs about $10,000 per square meter. So what we do nowadays is to use a very small piece and then focus a lot of light on it. It’s called concentrated photovoltaics—CPV,” Liu says.

“If you use this CPV in Arizona —that’s great, but in a place like New Hampshire it’s not a very good option.”

Liu is working with a grant from the National Science Foundation (NSF) Faculty Early Career Development (CAREER) Program to research both fundamental solar materials and their practical commercial applications.

“Hopefully one day we can make really high efficiency cells—two times more efficient than what you have now—and produce them at very little cost. You could basically put it on a roll of plastic at almost no substrate cost, and make it work,” Liu says.

Liu and his team are also working to develop a way to store solar energy with a different nanostructured thin-film surface that allows sunlight to heat liquid, known as “working fluid,” to temperatures greater than 1,000 degrees Fahrenheit while insulating the container from heat loss. This process, funded by a grant from the U.S. Department of Energy’s Sunshot Initiative, would use the stored solar thermal energy to drive heat engines, making solar power available at night and on cloudy days.

In addition, several of Liu’s doctoral students have filed patents on processes and materials developed through these research projects under a program that enables Dartmouth researchers to retain commercial control of innovative products.

Teaching is also an important part of his work at Dartmouth, Liu says. He has about 65 undergraduate who are sampling engineering in his “Science of Materials” class, and he teaches graduate students in his “Solid State Materials” and “Nanotechnology” courses. He has involved more than 40 undergraduate students in his research projects since 2010, offering them hands-on lab experiences.

“Students actually learn a lot from these kinds of open-ended projects. They discover that you don’t really have to find the ultimate solution, but you experience some of the pain in exploration. You really learn the skills to tackle a big problem, the skills of how to think about it, and how to work on it,” Liu says.

“That, I think, is the most important thing,” he says.