Radio broadcasts from Israel’s Independence Day in 1962. A children’s choral group singing folk songs in Fes, Morocco, in the 1940s. A 1951 address by the Israeli Prime Minister at a Jewish college in Massachusetts. These are just a few of the sounds housed in the Dartmouth Jewish Sound Archive (DJSA), one of the largest online Jewish scholarly archives in the world. 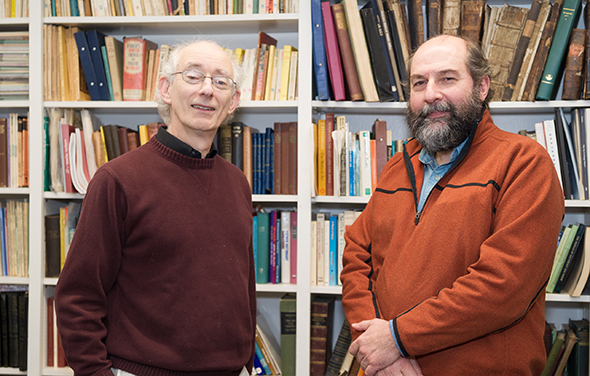 “I know of nothing larger,” says Lewis Glinert, the cultural director of the archive and professor of Hebrew studies in the Department of Asian and Middle Eastern Languages and Literatures. “It’s gone beyond my wildest dreams, really. I never knew half of these things were out there.”

Since 2002, Glinert and Professor Alex Hartov have worked to archive, digitize, restore, and distribute rare audio files through DJSA. What began as a way to store audio for teaching purposes has grown to more than 47,000 audio tracks of all types of sounds—radio broadcasts, personal histories, Yiddish songs, and more. The rare audio material has come from around the world and proves useful for a variety of research.

“I always had an interest in audio,” says Hartov, professor of engineering at the Thayer School of Engineering and the technical director of the archive, “and it seemed very sad to me to see these things going to the dump.”

The archive can be accessed for free by the Dartmouth community, and has also attracted interest from around the world. The audio recordings are valuable to musicologists, linguists, oral historians, and others. Linguists want to hear how language has evolved, while musicians listen to earlier recordings of folk tunes to inform their playing of traditional music. The primary source material provides endless opportunities for scholars across disciplines.

With many people interested in accessing the material, there are just as many who send audio recordings to the DJSA for preservation. These range from personal music collections to recordings from academic institutions. In one instance, Hartov and Glinert sifted through recordings from Hebrew College, a school near Boston. They were surprised to find a 1951 address by David Ben-Gurion, the first Prime Minister of Israel.

“The folks at Hebrew College didn’t even know they had that in their records,” says Hartov, the director of MS and PhD programs at Thayer. “I don’t think anyone was aware this was buried somewhere.”

Users can search the DJSA by album, genre, language, occasion, or theme.

Though copyright laws forbid DJSA from providing open access to those outside the Dartmouth community, Hartov says, DJSA is able to accommodate requests from non-Dartmouth scholars and researchers.

While many collectors “sit on” their collections, Hartov says, that hasn’t been his approach.

“The important aspect is to share something which is virtually impossible to find,” he says.

Glinert says that while there are other ways to find audio online, the goal for DJSA has been to create a permanent, easily navigated database for these sounds.

“Who knows where YouTube will be tomorrow?” says Glinert. “We hope we’re here to stay.”

It would appear so: DJSA recently celebrated its 10th anniversary and was featured in this fall’s Association for Jewish Studies magazine. And with about 100,000 more tracks in the queue, waiting to be digitized, the two professors won’t be slowing down any time soon.

“I have the collector’s disease,” Hartov says with a laugh. “I want everything that’s out there.”