Six weeks of the winter break are flying by. The hallways of the dormitories are peaceful and the Green is fairly vacant except for some who come to see the huge Christmas tree lit up at night or groups of little children who run around playing in the snow.

As quiet the campus is, the Dartmouth Big Green, our athletic teams, is alive and in fiery action through the winterim. Because we begin our winter break much earlier than other colleges, a lot of our winter sports are still taking place in December: track, basketball, squash, ice hockey, and swimming. This weekend, my friend and I went to a men's basketball game at Leeds Arena. This was doubly special as not only was it our first time at a Big Green basketball game, it was the last game of the season before the Christmas holidays. 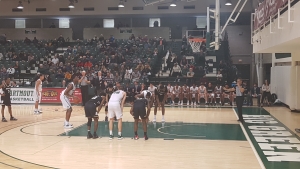 The whole arena in silence as a Dartmouth player attempt a shot at the free-throw line
If you're like me and are a huge basketball fan, you're definitely going to enjoy going to the Big Green games. Dartmouth students get free entry into the arena and you can choose any seat of your choice! We arrived about 15 minutes late so we weren't able to grab the really good center seats. But, hey, the ones near the sides are a hidden gem if you want to get close to the action and see the players when they enter the player's tunnel at halftime! If you know your college basketball, you might know that these games are 20-minute halves. This meant that by the time we arrived, the first half was almost over with only 1:17 on the clock. The Big Green gets two free throws! Dartmouth 32. Bryant 36. It wasn't hard to join in the excitement, though. Along with Dartmouth students, I spotted several families in the crowd, both the parents and the kids standing up in anticipation and clapping loudly whenever the Big Green stole a possession. This is one of the many times when you can really feel the presence of community that transcends beyond Dartmouth's walls. Just look at how cute these elementary students are running around in little yellow and burgundy shirts! 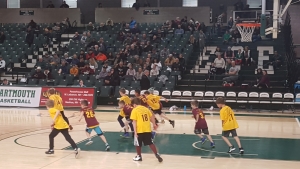 Just look at how cute they are!!
At halftime, aside from the bustling concession stand, more fun and games were underway. First, there was a short ball game between the 3rd and 4th graders from an elementary school in Lebanon. I felt like this really helped lighten up the competitive tension in the arena and cheering on the kids as they tried hard to throw the ball up high enough to hit the rim was just so adorable.

Next, there was a T-shirt toss. If you're unfamiliar with what this is (just like I was!), it's exactly what it sounds like. A handful of Dartmouth athletic shirts are thrown into the crowd by officials on the court. This is really where the center seats triumph all because unless you're SUPER loud and do something really crazy to attract attention to yourself, the T-shirts are usually tossed to the center seats. There was also a short trivia where an audience member was chosen to answer a question on the history of Dartmouth sports. All these events were so new to me because not only is basketball an incredibly young sport in Myanmar, we never had any audience-involved activities during sports games. This was such a fun way to keep up the spirit and genius way to pull in first-time attendees!

If I had missed the intensity of first-half of the game, I wouldn't have known because the second half was 20 full minutes of exhilaration and anxiety. The score was neck-to-neck.

A three-pointer by Bryant to pull ahead.

A two-pointer by Dartmouth to close the gap.

With 2:24 to go, it was Dartmouth 58, Bryant 61. Everyone was on their feet. I had my palms pressed against the sides of my cheeks and my friend had one of his hands holding on to my shoulder. The kids behind us were jumping up and down, occasionally spilling some of their popcorn on us. As the clock wound down, the whole arena was on edge as the orange ball from the hands of one team to the other. In the final seconds, Bryant got two free throws in and pulled ahead. It was just a 4 point difference! 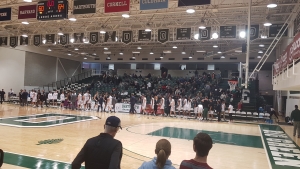 Players from both teams shaking hands after the game
The Big Green will be back after the holidays! Going to my first basketball game at Dartmouth, not only did I see my first dunk, I felt enamored by such school spirit and how people were so proud of the school they go to. I was already a lover of the game but if it's possible, I think I might just love the sport even more now.
Posted 12/22/2019 at 8:30 PMAll Text Posts

Freshman Year Reflection – What Have I Learned?

I recently finished my first year at Dartmouth. Now that I've had time to reflect, I realize just how much I've come to learn about myself in the past year. Hint: Dartmouth has a big hand in that.