If there's one thing all Dartmouth students can agree on at this moment, it is that winter 2020 at Dartmouth wrapped up way too quickly.

By the last few days of finals week, there were already long queues of students at the bus stop, waiting to board the Dartmouth Coach. Exams were converted to an online format at the last minute. Goodbyes with our friends were cut short from the rush of coronavirus concerns. And before we knew it, campus was almost deserted albeit for some locals who strolled on the Green and a few students who stayed behind. 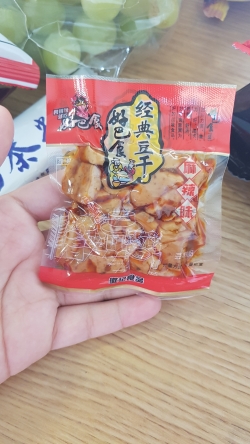 A traditional snack from Inner Mongolia- pieces of Tofu in a spicy sauce. It was absolutely delicious!
I was still on campus the first week of spring break and all of this passed by like a blur right in front of my eyes. To lift our spirits up a little, some of my friends and I decided to plan a potluck. With almost all of us coming from different corners of the world, it only made sense to use up all the extra food we had brought from back home before it came our time to leave campus.

Look at all the food we had been saving in our dorms! From chocolates to dried bean packets, we had snacks from various parts of the world!
That afternoon, we all gathered in a common room at one of my friend's residential halls. One thing I really love about the common rooms at Dartmouth is that they are very close to the kitchen area and some are even set adjointly. On one of the large tables, we had placed all the food we had cleaned from our dorms: packages of dumplings of different fillings, ramen and dried noodles, microwavable meals we had brought from campus dining, collection of chocolates we had saved up, stashes of potato chips and traditional snacks, jars and packs of sauces from back home, and a freshly bought packet of green grapes. It was clear — we were going to eat like kings.

What came next was a bit like trying to solve a puzzle. Each of us has brought in our own pieces: the ingredients. All there was left to do was try to fit together a picture, namely to cook a dish or two while marrying ingredients from different cultures. Did the bean thread noodles go with the spicy tofu sauce? How about the pork buns? We decided we would whip up the noodles (yes, all three kinds!), steam the dumplings, and place all of the different sauces and curry on the table so each of us could try combinations to our own liking. We were not exactly cooks but we were definitely good sports! 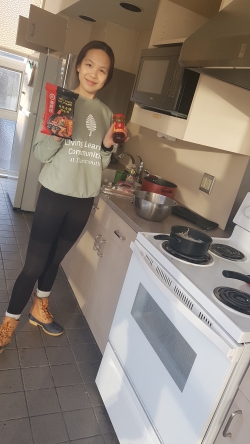 My lovely friend modeling the different spicy sauces while getting ready to whip up some noodles in the communal kitchen!
That mini potluck was the last "group activity" I had with my friends before we all returned home, uncertain of when we would see each other again. Two months? Six? In retrospect, we were just having fun, laughing at the slightly overcooked noodles or at someone's bizarre mix of soy sauce and chips. We didn't know we were making memories and I certainly wouldn't have known it would be the last time I hung out with my friends. Now, as I reflect on that day while I'm back home in Myanmar, I keep realizing how lucky I am to have met the people I did at college and have the memories I do now. My freshmen year on campus at Dartmouth might have ended abruptly but somewhere in the middle of figuring out classes and the rest of college, I had built something here so hard to say goodbye to, no matter how long.
Posted 04/20/2020 at 9:00 AMAll Text Posts