Hey all! I'm Jonathan, a soon-to-be senior, and I'm double majoring in Government and Middle Eastern Studies. Outside of academics, I am a senior admissions fellow, a tour guide, one of the editors-in-chief of the Dartmouth Jack-O-Lantern (our comedy publication), co-president of Chabad (a Jewish organization), and a very casual fencer. If I'm not doing one of those things, you can probably find me napping on the Green or trying to make my friends laugh while they study for exams.

You Just Can't Get Me to Leave

Hey! My name is Jonathan, I am a ’20 (meaning I graduate next year) from Rockaway Park, New York, and I haven’t had a real term “away” from Dartmouth yet! To clarify, since my freshman fall I have either been on campus taking classes or doing research, or participating in Dartmouth sponsored, for-credit, off-campus programs. So as I said, even when I am away from Dartmouth, I have always been under the Dartmouth umbrella. I guess you can say that I really love it here and that Hanover has become a second home to me.

I came to Dartmouth because I loved the idea of being on a smaller sized campus with a strong sense of community, as well as its strong undergraduate focus. What I didn’t realize about that undergraduate focus before getting here was the vast array of opportunities there was to get involved in research! I’ve researched everything from British subversion against the Soviet Union in the early Cold War, to finding ways to help mitigate loneliness in elderly populations through the use of word puzzles! I worked on the latter in Dartmouth’s game design lab, Tiltfactor, which might be one of the coolest organizations on campus.

Beyond the research, I am double majoring in Government and Middle Eastern Studies, and I hope to go to law school after graduation. Where and what for? No idea yet, but after taking a bunch of law related classes here I know it’s the right path for me. Outside of these academic pursuits, I commit most of my time to the Jack-O-Lantern, which is Dartmouth’s comedy publication. I hadn’t written comedy before coming to Dartmouth, but the club was really welcoming and taught me all I need to know, and now it is one of my favorite things to do! I also spend a lot of my time with the Jewish community here and the fencing team (another thing I didn’t do until college). 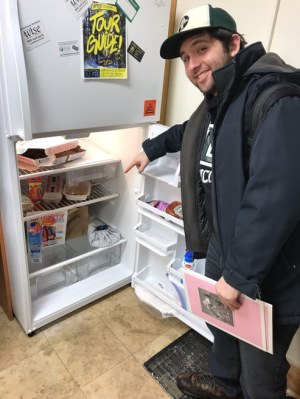 Picture of me making sure that the freshman had a copy of the Jack-O-Lantern spring issue available to them in the fridge.
Now that I’ve covered the important stuff, here are three fun facts to know about me:

I look forward to writing all about my time here, hopefully in a way that is both entertaining and enlightening!

As you can see, what started as a simple blogging job has transformed into one of my biggest involvements on campus. What's great is that I love the work that I'm doing, and since it takes on so many forms, I never get bored!

Have you ever wondered what a Dartmouth freshman's course of study may look like? The beauty of the D-Plan is everyone can customize their own schedules, so this term I'm taking International Politics, Global Health & Society, and Expository Writing.

This winter is my first term really focusing on classes in the government and economics departments, so I thought I'd walk you all through my class schedule and experiences so far!

Diving Into Government at Dartmouth

This term, I took a big leap and signed up for not one, but two classes in the Government department.

A Trick or Treat Yo'Self Week

The last week of October was especially ~spooky~ as I was able to find more time than usual to enjoy my weekend with friends and the small-town-charm of Hanover.

Taking a step back and introducing myself

I was recently looking at some of my older posts, reliving the glory days of freshman fall, and I realized that I never actually wrote an introduction post talking about myself! But better late than never, right?

There are several organizations on campus for students to participate in that it can sometimes be overwhelming. Thankfully, I was able to find People of Color Outdoors (POCO), which has been a great community to be a part of!