Rise and Shine (and Hike)

It's Friday morning, and my alarm goes off at 4:15 AM. No, I didn't have an exam to study for, or a plane to catch. I was going on a sunrike (sunrise hike)! With some other girls in my sorority, I planned to hike Gile Mountain and watch the sunrise from the top of the tower – neither of which I had done before. It was one of the remaining items on my bucket list, so even though I was exhausted, I resisted pressing that snooze button. 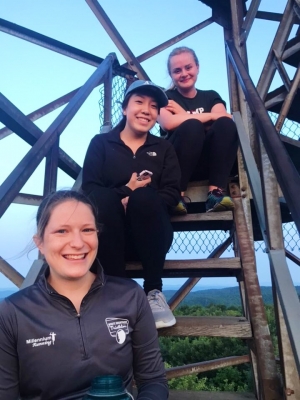 Prime viewing spot!
Upon waking up, I quickly got ready and met the other girls in the kitchen. With anything as early as a sunrike, it's inevitable that some people will accidentally miss their alarm. Nonetheless, we eventually hopped in a few cars and started the twenty-minute drive to Gile mountain! I have only hiked a handful of times since coming to Dartmouth, but every time I go, I'm always astounded by the views of the surrounding nature and the fact that they are so close to campus. This time was not any different.

The hike was super short, only half an hour or so, and very manageable even for people prone to tripping, such as me. During the day, many families hike Gile and bring along young children, so it's definitely a safe and easy hike. The tower though, that was another question. As someone who is mildly afraid of heights, I simply kept on climbing stair after stair, trying to block out the fear from being so many stories above the ground. 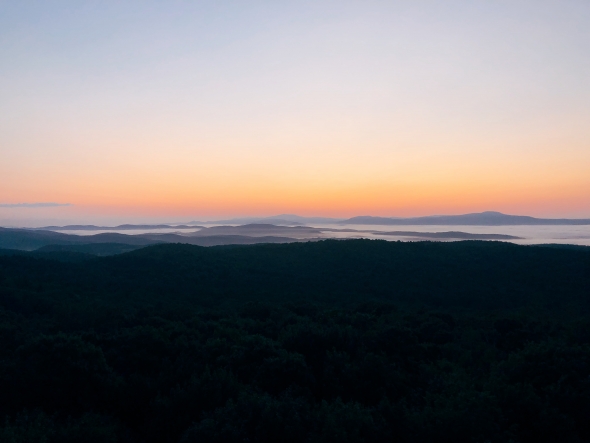 It seems that we were not the only people who had thought of embarking on a sunrike that morning, as the top of the tower was already filled with some students we knew and one of the students' parents. Instead of all crowding together, we decided to watch the sunrise from one flight of stairs below, which also meant we could sit on the stairs (peak laziness, am I right?). It was crazy to see the sun literally come up before our very own eyes, and so quick, too! Within a few minutes, the sun had risen in the sky. That morning was particularly foggy, which was a pain to drive in, but from our position, made it seem as if the mountains were islands surrounded by water. 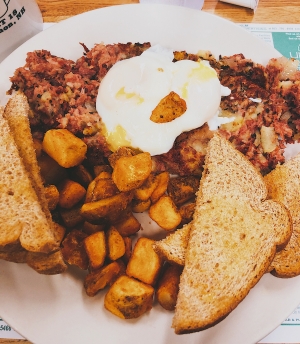 Breakfast food, the perfect thing to close out a perfect morning.
We lingered around for a while, moving to the actual top of the tower once the people there left. We snapped some photos, then headed to our next destination: The Fort! It's a popular diner near campus, and I had never gone before. After arriving back home, I ended up napping for an hour before class even though I drank coffee at the Fort, content and full from breakfast. If you ever have the chance to go on a sunrike, and I know you will if you come here as there is one at the very end of First-Year Trips, definitely go! It's worth a few missed hours of sleep.
Posted 10/21/2019 at 11:30 AMAll Photo Posts