In case you didn't know, Dartmouth operates on a quarter system, which means that in each term, students typically take three classes. However, they can also elect to add an additional course, which students do for many reasons. Maybe they are simply interested in all the class subjects, or they need to fulfill a certain requirement. While it's usually not recommended for freshmen, it is definitely manageable. This term is my second four-course term, and I've been enjoying it a lot more than I expected! I think the fact that my classes are all balanced and different in many ways has been helping the workload feel less intense. 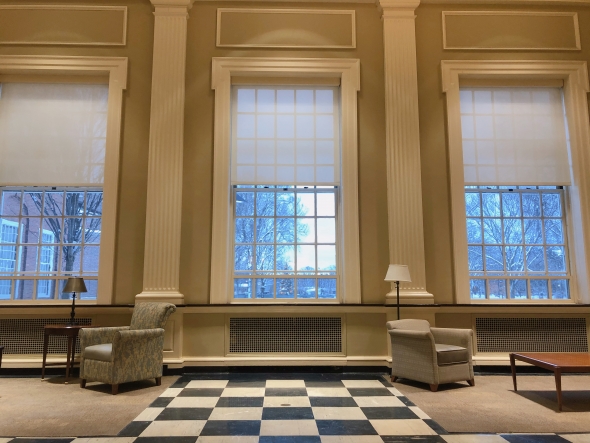 One of my favorite study spots this term is in Baker Lobby (or Blobby, as per Dartmouth students).

Since I also did a four-course term my junior fall, I will be able to graduate in one less term! Other students do the same by graduating in their senior winter instead of senior spring, so that's another option. My four classes are BIOL71 (Current Topics in Cell Biology), BIOL40 (Biochemistry), ASCL62.02 (Traditional Performance in China), and QSS 82 (Major Quarter Project). I actually needed to take all of these four in order to fulfill some major and distributive requirements.

Although I have two biology classes, Current Topics is more of a reading-based discussion course (as many upper-level biology classes are) while Biochemistry is more of the traditional exam-based format. I have especially enjoyed Current Topics because I know most of the students after taking four years of classes with them. We also have groups of four students that we work with in every class, which is greatly appreciated in the Zoom environment. We tried out a new platform called Gather, where we each have an avatar we can move around to join different groups.

I decided to take Traditional Performance in China to satisfy my second-to-last distributive requirement (literature), but I've also always wanted to more formally learn about China. Being Chinese myself, I definitely have a familiarity with some of the things we talk about, such as popular TV shows or cultural performances, but it's been fascinating to learn about the historical and political context through which those things have developed. This class is mostly asynchronous and has an optional synchronous component, so I get to participate in small discussions on Mondays with the professor and about five other students. Last class, I participated in a demonstration of xiangsheng, a famous Chinese comedy segment between two performers.

My friend and the massive snow pile we encountered on a study break off-campus.

I was nervous about another four-course term, especially with some more difficult classes like Biochemistry, but it hasn't been too bad! There is a lot of support available if I, or any other student, have questions, and my courses have been super engaging, which makes doing the work enjoyable. I'm trying to glean as much knowledge as I can in my last two terms here! The professors and my fellow classmates are such a wonderful source of information that I will surely miss.