Exploring our Origins - One Fossil at a Time

This term, I am taking Anthropology 41, a class on human evolution taught by Professor DeSilva. I decided to take it because I am interested in pursuing a global health minor, which requires one class in biological anthropology. I had previously taken a class on the evolution of the human genome, so I thought this class would be relatively similar. I couldn’t have been more mistaken.

We launched our first class by taking a time capsule back seventy million years to the origin of primates. Every week, we move along the timeline and learn about the evolution of our ancestors, from primates to catarrhines to apes, and finally hominins. 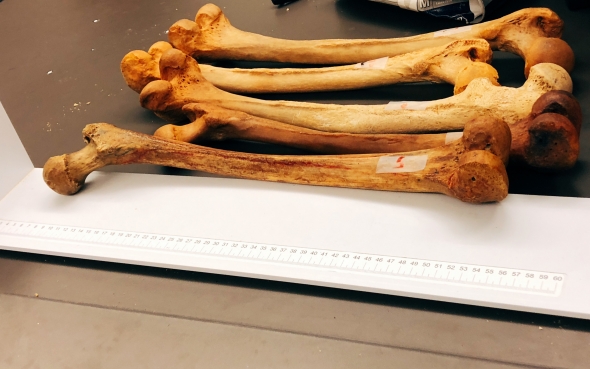 For our final project, my group investigated whether or not Homo erectus had a growth spurt. To do so, we had to compare the femur lengths of two different Homo erectus specimens as well as those of five Homo sapiens.

I remember feeling a vague sense of déjà vu during lectures, but it was only last week, when our professor began a slideshow on a recent discovery in South Africa, that I realized why all of this sounded so familiar. I had actually listened to a talk by Professor DeSilva during Dimensions more than a year earlier with my family. He presented photos of the Rising Star cave and told us about how he was able to take some Dartmouth students to the fossil site. One of the students even found a hominin fossil – something which usually takes trained paleontologists years to accomplish.

One of the reasons that I am glad to have taken this class is that it reminds me of the importance of interdisciplinary studies. Although I took two classes on evolution, they were incredibly different in so many ways. I trudged through tough homework sets about tandem gene duplication events in Biology 11, trying to analyze genomic data to make inferences about the evolution of our genome. For Anth 41, I read papers about how we can hypothesize whether or not an early hominin species walked bipedally or used symbolic thought. The questions we seek to answer, as well as the means by which we attempt to answer them, vary remarkably.

By stepping into the shoes of both an evolutionary geneticist and paleoanthropologist, I have been able to explore human evolution on a deeper level than if I had only studied it from one field. As someone interested in biology and global health, I have also taken classes in the Chemistry, Psychology, Sociology, Women’s Gender Sex and Sexuality, and Anthropology departments, and hopefully by the end of the year, many more. Before I took this class, I literally knew nothing about human evolution outside of our genome. I didn’t even know the distinction between a monkey and an ape! Luckily, now I have a bit of more insight into the common history that connects all of us Homo sapiens.