To Do: Build a Rollercoaster!

This term, one of my classes is ENGS12: Design Thinking, one of the most popular and well-known classes offered at Dartmouth. It's also totally out of my comfort zone, as the first ENGS class I've ever taken. Many students describe it as the class that changed their trajectory at Dartmouth, opened up their eyes to so many possibilities, and reframed their perspective.

I'm hoping the same will happen to me! I think part of why it's considered such a revolutionary class is because of the emphasis on collaboration and how to make teams work. Many of the projects are in rotating groups with other students, even in the remote setting. This past week, we had to build an entire rollercoaster for a ping pong ball! 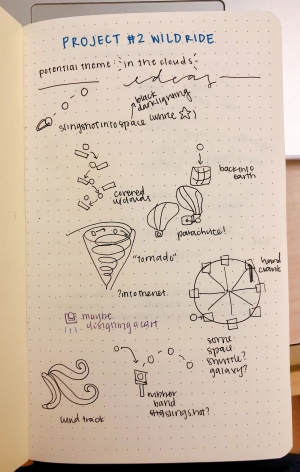 We keep a design log notebook where we sketch out ideas for our projects (you can see some of my early ones here).

You might be asking, how do you build a rollercoaster while being in different places? Well, the answer lies in the power of film. We each create our own part of the rollercoaster, and then paste video clips of the ball traveling through the structure into a cohesive experience. As our first group assignment, I learned so much about communication, brainstorming, and tinkering with my hands.

Since I'm on-campus, the first step was to head over to the Thayer School of Engineering to pick up a kit of supplies. In the kit, there were scissors, foam core, a hot glue gun, journal, rubber bands, cutting mat, X-acto knife, and sticky notes. With those at the ready, my group began brainstorming potential ideas for the theme park ride.

In the previous classes, we had learned about how to be an effective brainstormer - write down as many ideas as you can, don't ask questions or strike down other people's ideas, and maintain a culture of support. While I use brainstorming a lot in my other classes and extracurriculars, I've never actually formally learned about how to improve my skills in this area. 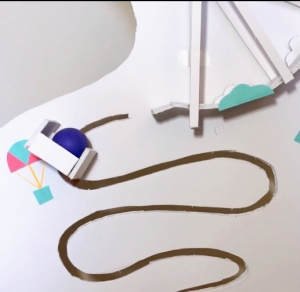 I was responsible for the last phase of the ride - returning to Earth on a parachute!

Of course, after brainstorming comes the hardest part - the actual building. I was so nervous about messing up, and really doubted my ability to construct anything given a lack of knowledge in physics and engineering. But after many prototypes and attempts, hot glue gun residue and foam core scraps littered across my floor, I finally ended up with a roller coaster section that I felt proud of.

One of the most rewarding experiences was sitting down with my group over Zoom and watching all of our clips with the work we've put in. None of it was new, as we had met every day of the week to check in with each other, but seeing the final product was amazing. We laughed as we added in different sound effects, created a fun script to introduce the rollercoaster, and learned a ton about teamwork and collaboration along the way. 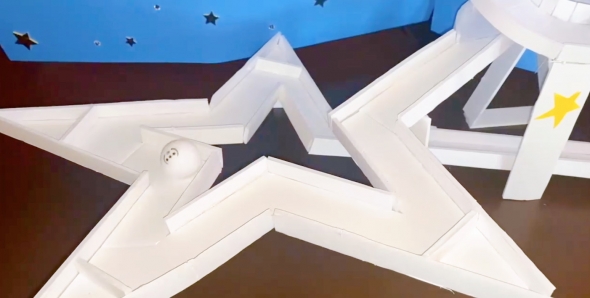 One of my group members made this star structure, which received lots of positive feedback after our ride premiere!
Posted 10/8/2020 at 9:00 AMAll Photo Posts

My freshman year is coming to an end, and I've taken a handful of STEM courses here to speak about my experience so far––it has been quite an interesting ride!

Ever wonder what STEM labs are like at Dartmouth?

A walk to the Montshire Museum of Science!

At Dartmouth, we are lucky to live in an extremely scenic environment. Among all the fun activities one can find in and out of campus, my favourite has to be visiting the Montshire Museum of Science!

Over the past two and a half terms here at Dartmouth, I've picked up on ways to be successful in the classroom. Especially if you're from a first-gen, low-income background, hear me out!

All About Lab Classes

The Dartmouth term is already packed with classes and work, but what happens when you add a lab requirement?

The liberal arts system allows for a lot of freedoms – especially at Dartmouth! Here is how I've been taking advantage of that this term.