This morning, I woke up to sunlight and stepped outside to snow. It was a crisp 25 degrees, a temperature which seeps into the glass and encourages students to put on warm socks. Before leaving the dorm, I lingered in the entryway, which is heated like a small sauna and regularly tempts me to stay in rather than face the elements. It reminds me of Narnia; the warm snugness of a dozen fur coats barring the way to a brisk alternative world.

I bounced on my toes. "In three seconds, you go outside."

Three seconds came and went, I pushed the metal handle, and immediately crisp air settled around me. I assumed the position: chin dipped into my jacket, shoulders curled, and hands deep into my pockets—where I found a packet of Saltines, the wrapper of which crinkled resentfully, as though to say, "What are you doing here? No need for pockets just yet."

True, I longed to reply, for despite having expected snow for the last few weeks, the calendar tempts me into reconsideration. After all, it is still fall term. Even the trees aren't yet ready to don their wintry wear. Hundreds of branches are still festooned with brown brittle leaves, fall's firm hold of campus unyielding even at the first snow. 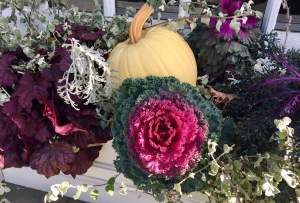 A pumpkin hidden in the winter-appropriate flower arrangement outside one of of Main Street's storefronts.
Despite the chill, it was difficult not to smile at the first sight of snowflakes. They're gracious in their smallness, little fluffs of frozen water swirling lightly throughout the air. At this point the flakes are the size of the speck in "Horton Hears a Who" (appropriately Seussical, I guess). Though not intimidating, they are a reminder of what's to come.

Dartmouth students have a robust school-specific vocabulary, and one of the favorite terms is "warm-cut." This is a short-cut one takes through a heated building, thus minimizing the time spent outside and maximizing the amount of warmth one feels when walking across campus. I treated myself to one, scurrying into Baker-Berry Library (though it was somewhat out of my way) with abandon. I savored the walk up the stairs and past KAF, where a sleepy line wound just to the outskirts of the café. Evidently, we were all taking warm-cuts this morning. 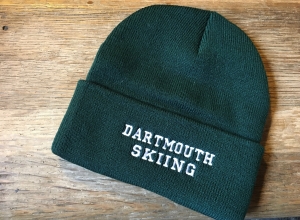 The gift I purchased myself after looking at the weather forecast. No, I'm not a skier, but the hat was on sale and it's cute enough to make me want to hit the slopes despite lacking talent and experience.
As I stepped out onto the Green, however—at which point a mischievous blast of wind tried to push the door inward as I pushed out, further reinforcing my inclination to remain indoors—I found an incredible paradox playing out vibrantly for everyone to see.

Fall and winter swirled in the air, brown leaves suddenly leaping from the branches to float alongside snowflakes. The bright snow and crisp leaves formed tiny tempests that danced over the entire Green. Though all seasons in New Hampshire are vibrant, this was unprecedented. The very end of fall—leaves no longer technicolor reds and oranges but muted brown—and the start of winter—tiny reticent flakes—combined in perfect harmony. The transition from one season to another played out in an obvious hearkening to the turning of the year's pages.

Nearly every Dartmouth applicant has heard about the weather. Dartmouth first years have yet to experience it. But the winter which everyone talks about is poised to return, gently reminding all of us with its first flurries that fall is at an end, that as we complete first term courses, the time has come to prepare for a new one.

Despite the cold, there's something hopeful in the snow.

Here's to a new season of adventures, friendship, warm clothes, and yes, warm-cuts. Wishing you all a happy end of fall term!

An Unconventional Yet Untradeable Freshman Year

Wow, my freshman year at Dartmouth has really flown by! Towards the end of summer 2020, I received a warm welcome email from my Orientation Peer Leaders inviting me to join a Zoom call with around ten other of my classmates.

Three things I've learned about myself at Dartmouth

As we approach graduation day, I continue to reflect on my time at Dartmouth. I've learned a lot about myself over the course of the last four years, but here are three of the most important things I've come to realize...

What I Love About Dartmouth

In no particular order, here are a few places and ways I love to spend my free time as a student at Dartmouth. I hope this post can give you a glimpse into how wonderful campus life can be!

Exploring Dartmouth and the Connecticut River

Here is a glimpse into the gorgeous outdoors that sits on and hugs Dartmouth's campus. On this fine May afternoon, my friends and I paddled down the Connecticut River for the first time now that the Ledyard Canoe Club opened services. We had a blast!

Spikeball on the Green, cherry blossoms in front of Baker….as spring is arriving here in the Upper Valley, I thought I'd write a quick post about my favorite things to do near campus this time of year!

A Saturday in Rumney, NH

This week, I had the amazing opportunity to take a rock-climbing class at one of the country's best climbing spots: Rumney, New Hampshire.

A Spring Walk Around Campus

The trees are full, flowers are blooming, and the weather is gorgeous.

How to find a campus job!

Let's talk about job offerings on campus and how to secure a position!

Something fun and new that I thought might be fun to write about is theBox, a food truck founded by students from Dartmouth's Tuck School of Business.