Though probably the most commercialized American holiday, its massive consumerism had little effect on my childhood self. In those years, I gleefully trundled about in costumes which all smelled the same—some unquantifiable blend of polyester, mass production, and imagination—and were rendered unrecognizable by the addition of gloves and hats, function meeting form in a summit of childish joy. There was little better than walking through wet leaves in a costume which had been liberated from our weary cardboard storage box, an old bag gripped in my hand as I accumulated a socially unacceptable number of KitKats.

In fact, the first year I didn't go trick-or-treating (using younger relatives as an excuse to get candy) was my senior year of high school, because college application season required me to sit at the dining room table polishing an essay into the wee hours. But I put blue sparkles on my face and ate a couple Almond Joys, determined to partake at least a little in the festivities. I felt grown up and altogether cheated by the system; as insignificant as the holiday is, I've come to crave the special feeling which comes which the last day of October.

After that, I assumed Halloween was something I could look upon but not partake in. The college-student's role in the holiday was assumedly that of a disinterested bystander. This year, I woke up Halloween morning, looked outside at the bleak grey fog and bright autumnal leaves, wondered how punishing the rain would be if I left my jacket in my dorm, and, when the date finally occurred to me with the sullenness of an reluctant visitor, decided that was that—Halloween was going to happen without me from now on.

Or not! A walk into the Class of '53 Commons (colloquially "FoCo") offered giant inflatable pumpkins, haunted trees, spiderwebs dangling from the ceiling, and flashes of costumed flair, proving the enduring dedication of college students to the holiday. After breakfast, I took myself to Sanborn Library—arguably the best library on campus, for its small wooden embrace suggests centuries past. The quiet ambiance and vague bookish smell attract workers with an almost mystical feeling. As the rain peddled down, I hurried inside and took myself up the winding stair. From a red seat in a nook beside the window, I looked around and watched as people chattered about costumes and my email inbox flooded with Halloween-themed gifs from almost every student-run club.

For all those who are scrambling to enjoy the last Halloween before they enter college, don't worry. You'll still be able to find a student in a dinosaur onesie, pumpkins smiling from doorsteps, and bright yellow leaves. You'll also find bowls of candy balanced atop tables, their contents dwindling steadily throughout the day as indulgent teachers restock the supply, knowing better than to put out signs saying "Take One" for a student body which hasn't seen candy in weeks or months. 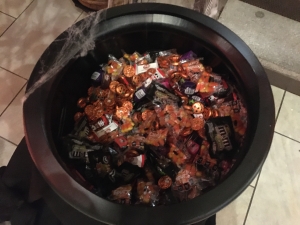 A cauldron full of candy!

By nightfall, the wind whipped and rain fell in an eerily Halloween-esque storm, leaves swirling mischievously into the air. FoCo's decorations rivaled those of any neighborhood enthusiast, with haunting music, a photo booth, a cauldron of candy, and pumpkins galore. As I walked back to my dorm, the obliging skitter of leaves and finger-wagging trees played up the Halloween effect; closing my eyes, I felt a childish shiver of fear at Dartmouth's one-night act.

If you're applying to college—and perhaps spent Halloween night editing essays—don't assume that's the new norm. Though officially college students, at some level we're just grown-up trick or treaters who need a single grinning Jack O' Lantern to prod us into festivities. Halloween is an excuse to have fun, its commercialized nature lending itself to candy, costumes, and movies. If you attend any college in the US, you'll likely feel the festive effects of Halloween even if you don't decide to dress up or collect candy.

However you choose to celebrate, if you come to Dartmouth, we look forward to celebrating with you! 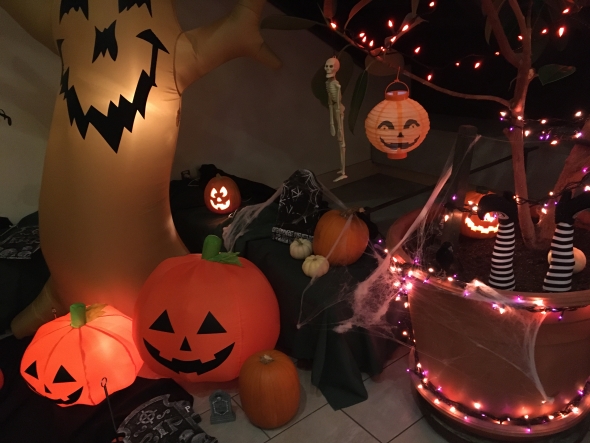 This display, featuring glowing pumpkins, a smiling tree, and the Wicked Witch of the West, ushered students into the dining hall. There was also an automated spider, which I set off not once but twice in the taking of this picture.
Posted 11/1/2019 at 4:45 PMAll Text Posts

Things to do during Winter Term!

Take a look at a few activities I do during Winter term as an on-campus student!