The Dartmouth Bonfire Holds a Candle to the Olympic Flame

Come fall season, the word is spoken millions of times around the country in anticipation of the popular school tradition celebrating such American educational supplements as football and dancing. Homecoming is spirited, exciting, and something I was thrilled to find on Dartmouth's campus. Pass the glitter, please.

Even Merriam-Webster indulges us. "An annual celebration for alumni at a high school, college, or university." (see homecoming rally, homecoming weekend, homecoming game/dance). The rah-rah of Homecoming is difficult to ignore on most campuses, and on Dartmouth's nearly impossible. After all, the Big Green has a D-1 football team, alumni to spare, and school spirit that compels its students to subconsciously reach for hunter green.

And yet at Dartmouth, Homecoming is so much more than "an annual celebration for alumni at a high school, college, or university." In fact, I would venture that in Dartmouth's case, despite the veneer of a traditional American Homecoming, we suit the first humble definition far better: "A return home."

As a freshman, I assumed the well-known tradition of the Homecoming Bonfire was a "welcome to Dartmouth" exercise, the relevance of which would dwindle the closer we got to 2023. However, the growing excitement around campus in the days leading up to the celebration led me to wonder whether Homecoming was bigger than I had imagined.

On the day of the event, there was a sharp increase in the number of people on campus. Grandparents, couples, and children roamed the Green, their enthusiasm palpable. As evening fell, we donned what Dartmouth-specific clothing we owned and gathered with our cluster of buildings in anticipation of the Sweep. Then, standing outside in the sudden dark, we waited.

When the soft blip of a police siren interrupted one hundred quiet conversations, we turned to watch. Behind a slow-rolling escort came the sight of a banner and the sound of hundreds of our fellow '23s cheering. We were "swept" into their ranks, our figurative and oft-referenced community becoming a literal conglomeration of humans from 92 countries and 50 native languages, united by a single school and a single number. Dartmouth 2023. 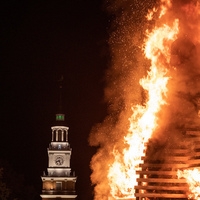 Dartmouth's Homecoming Bonfire, courtesy of Dartmouth photographers
Upon reaching the Green, we were offered the full silhouette of the massive bonfire. Thousands of pinwheeling sparks illuminated the evening. Completing the sensory overload was a sound not usually made by bonfires—cheering. We filed into the ring around the fire, the heat of which was approximately the Kelvin of a smallish star. It was then that I realized that I had indeed been mistaken: The Sweep was for the '23s. But the Bonfire was for everyone.

Cheering, waving, and smiling despite the heat were students and alumni whose collective Dartmouth experience spanned decades. We completed a single ceremonial lap, but the alumni stood and cheered for the equivalent of a dozen. Our time beside the bonfire seemed reflective of our time at Dartmouth—we were merely wide-eyed freshman, welcomed into this tradition but certainly not the reason it persisted.

It is difficult to classify the Bonfire as anything other, for though all of us have lives outside of Dartmouth, we are connected across time by the handful of years spent on this campus. 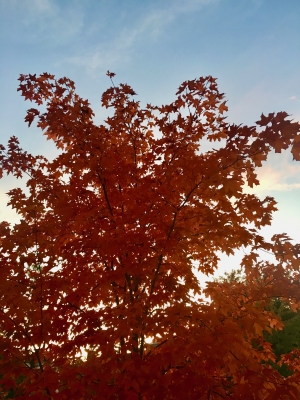 A tree reminiscent of the bonfire, and a reminder of the literal and figurative place for tradition on campus.
Despite the late hour, hundreds of people stood across the Green, talking, laughing, and reminiscing. The celebration gave off the illusion of a reunion. We freshman, the youngest, were not the last to linger. Rather, it was those who had spent the most time on the Green who stayed even as the bonfire dwindled quietly into itself.

After the Homecoming Bonfire, I would argue that the tradition is something previous generations offer like Dartmouth's version of the Olympic Flame. Our Bonfire is a carefully tended flame passed from one year to the next, an expression of hope for improvement and commitment to both the past and the future. As one gentleman told us, "You're alumni-in-training now."

When alumni gather and cheer and clap, they remind us that the Bonfire is not for the '23s. Rather it is for all of us, a tradition every class has the opportunity to maintain and improve upon. Perhaps members of our class will stand around the bonfire decades from now, commenting on the size, the sparks, and the wide-eyed freshmen.

Coming Back to Campus to Snowball Fights and Friends

I am now settling into campus life again. And what better way to do this than attending the famous snowball fight?