Independent Studies: Coding in the Humanities

Myself and fellow blogger Jul are taking this super cool class together, which is basically coding for the humanities. It's extremely interesting. Check out Jul's post on it here. We were both so interested in the topic that we wanted to continue to do work in the discipline. For this class' final project, we decided to be ambitious: we would pick a topic, that would hopefully fit both of our interests, and we would continue that project through independent studies.

Jul is a religion major, and I am planning to double major in computer science and history. Thus, we decided to look at texts during the English Protestant reformation. Moreover, we wanted to know if we were able to computationally trace change in religious thought over time. This is a huge task already—there are so many more questions that could arise from this problem. But we hope to take it further. We want to see if modern day government documents contain the same, or at least similar, sentiments. This is going to be a colossal feat, but thank goodness we have an amazing professor to help us.

There are three main routes we could take when studying English Protestant reformation era documents: those from the crown, those from the church (which was often very one and the same), and those from the public. For our final project, we chose to tackle documents from the crown. This meant collecting declarations and acts, or other public statements by the crown that were at all religiously related. We were able to arrange documents ranging from Henry VIII to Charles I, just before the English civil war. 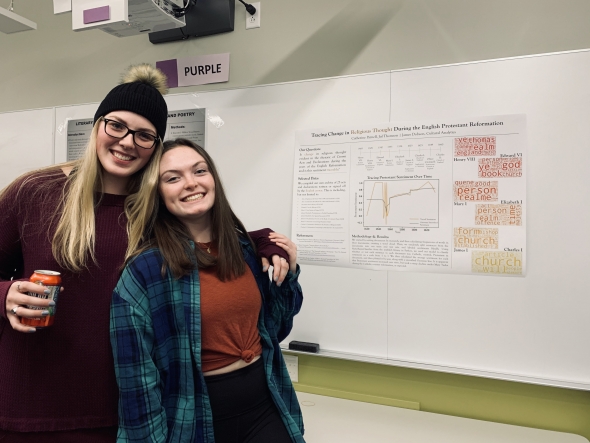 Presenting our final projects during class last week!
We presented our project to the class last week, which was a lot of fun! We found that we were able to trace change over time. Our graph reflected a steady rise throughout the reformation, with a sharp decline during Mary Tudor's catholic counter-reformation, which is what we expected to see. This was so interesting to actually be able to see our hypothesis laid out in the data!

Now we intend to refine our methods, and expand this model throughout different types of data, independently the next term, for course credit. We are very excited, and it is a very rewarding opportunity, but not one that is altogether uncommon. Many people are able to talk to professors and work out independent studies that they get to take for course credit. There are so many opportunities here at Dartmouth to pursue whatever subject you desire.