Course selection. Fall 2018. I’m a first year. I don’t have a major yet. I can take (basically) anything I want. What happens?

Random, I know. But for whatever reason I was drawn to this class. I read the syllabus and it looked fun! I went to the History open house, met the professor, and then decided to throw all care to the wind. I was going to take this class.

I get there on the first day and there are six people. At first I was a little scared, since I’d have to always be attentive, I would never get to hide. However, quickly my fear subsided. It became easy to speak up, to get to know the professor, and to learn a lot more. It’s a classroom environment like no other I’ve experienced before.

Honestly, never in my life did I think I would know this much about Gandhi. We read a lot. Almost every class there are readings due. And yes, those books down there? I’ve read all of them. 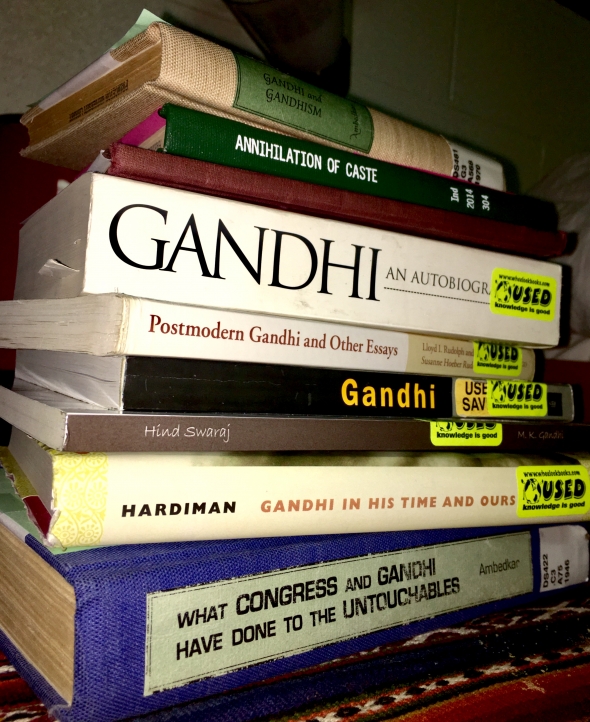 Here are all the books I've read so far. Some of them I bought, some are from the Dartmouth Library, and others I rented from other university libraries using the program BorrowDirect.

In fact, the other day my professor mentioned he had recently met Asit Bandyopadhayay (an author whose articles we are reading), which naturally, we found really cool. But THEN he just casually mentions that he’s actually personal friends with Hardiman and Arnold and all these authors we’re reading, which is crazy! When he asks us, say, “what’s Hardiman’s argument here?” he actually knows what his argument is because they’re actually friends. I was pretty shook.

Currently, we are in the midst of in-class debates where one of us in the class plays Gandhi and another plays someone opposing Gandhi. For example, I got to play Ambedkar where I debated Gandhi on the subject of caste and untouchability.  I got the chance to fight Gandhi and tell him he was wrong, as part of the class. Honestly, I was thriving. Life. Made.

But all in all, history has really helped me in my other classes. In Writing 5, some of the readings and one of the essays I wrote overlapped with some of the thematic ideas I’ve learned from my Gandhi class. Now for my final research paper for writing, I am integrating the two ideas and comparing and contrasting sentiments I’ve learned from both classes. All in all, taking history has been so rewarding and such a good experience. I look forward to my next class within the department.

The moral of the story is be spontaneous. Take classes that interest you. Have fun! Try new things! That’s what college is for!

Reflections on My Penultimate Term!

Thinking back, this winter has been a whirlwind. I wanted to use this final blog post as an opportunity to organize my thoughts and share some reflections as I move into my final term!