A Class on Game of Thrones?

Game of Thrones. Global phenomenon. Final season coming up soon, April 14th. What better way to prepare than taking a whole class devoted to Game of Thrones itself?

That’s exactly what I chose to do.

This Winter term I decided to take ENGL 53.36: Game of Thrones: Re-Imagining Medieval History as an Allegory of the Present. It is an English class devoted to studying Game of Thrones, focusing on the meaning of adaptation between the book and the show. We read A Game of Thrones, the first novel of George R.R. Martin’s A Song of Ice and Fire series, and then watch both season one and season seven of the show. For homework. It’s great.

We have class on Monday, Wednesday, and Friday. Mondays and Wednesdays are for lecture, with lecture topics range from “Poison, Contagion, Beheading” to “Climate Change: Great Re-Awakenings.” Meanwhile, Fridays are devoted to a class discussion. Each Wednesday we write a discussion post and a group of students responds to the post before class time on Friday. This facilitates a lively discussion in class over a different chosen topic each week. We’ve discussed every aspect of race, gender, and justice, among other topics. Using various theories of adaptation, we debate how the various changes from novel to show have changed the meaning and resonance of certain themes. 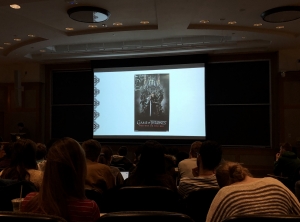 David Benioff '92 gave my professor this poster, signed "give them all F's"!

Getting to take cool classes like this one is a benefit of the liberal arts education that I wouldn’t trade for the world. I can’t believe I get to take such a cool class. In fact, besides getting to analyze one of my favorite shows, this class even fulfills a distributive requirement. This class is helping me graduate. On top of that, the professor who teaches it is fantastic. I hope to take another class with him next year.

Now, after this class, I’m equipped with a whole new understanding of analysis of media. It has totally changed the way I watch the show, as I now see a whole new depth to different scenes, characters, and callbacks. Come season 8, I can’t wait to see who ends up on the Iron Throne.

10 Things I Learned During 10 Weeks at Dartmouth

This term has flown by. Here are some of the things I've learned

My Classes of Winter Term!

Curious about what a freshman's second term course load looks like? Here's mine.