Dangerous saws! Loud noises! Inhaling sawdust and blanketing yourself in woodchips! All sarcasm aside, Dartmouth's woodshop—wonderfully located in the basement of the Hopkins Center—is a hidden gem on campus. It's one of those places that seemingly everybody knows of, but few people have actually visited, tucked away underneath the Hop's central corridor, always ready to snag new students into the realm of woodworking. Being the son of a carpenter (who was also the son of a carpenter), the woodshop had always caught my particular attention, but I didn't quite get the chance to stop by until this term. In fact, it wasn't even directly of my own volition; my COCO 20 class (Making Music: The Art and Science of Musical Instrument Design) had a group intro and safety session during one of our class periods, and the next week we returned to fashion wooden flutes. I found it the experience to be incredible, and I was honestly disappointed that I hadn't checked it out on my own any sooner. So later, when it came time for my term-project group to decide what instrument of our own to create, I suggested something woodworking-heavy, and my teammates eagerly agreed. 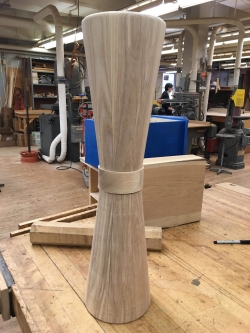 With the help of our group's shop instructor and the woodshop staff, we got to work constructing a complex wooden drum: a variation of the talking drum, fashioned out of two eight-faced cone-like shells and then rounded on the lathe (the famed axial wood-spinning machine). After plenty of cutting and measuring, making jigs, mistakes, and even more mistakes, our pieces were glued and finally ready to be turned. I assumed our instructor would do most of the work, the lathe being a relatively specialized piece of machinery that we only needed to use for a minute part of our project, but I was surprised when I found the tools thrust into my own hands. After just a bit of training, I woke up two days later up from a wood-turning daze, having closed out the woodshop twice in a row after two five-hour work sessions. Luckily for me, there's still even more work to come.

Altogether, this is one of my favorite parts of the Dartmouth experience: trying something new due to some random chain of events and ending up loving it. And hopefully, this is just the beginning. After watching a peer carefully craft a pair of wooden snowshoes, and also witnessing another build an entire wooden kayak, I'm eager for my next project. Who knows what it will be?

A quest for the perfect study space during finals week!