It's 3AM – a long night of studying nears its end, and my fading mental capacity beckons me to the cozy comfort of my bedsheets. It's exam season, and sure, maybe it's a bit bleak – I certainly didn't intend upon staying up this late – but as I amble groggily toward the door, I catch a sight of something exciting past my reflection in the window. Fluttering flakes gleam in the light of the streetlamps; a step outside and the world has turned white, a picturesque wonderland of snow-laden shrubs and blanked Georgian buildings. Tiny crystals cling to my black sweater like burrs, and my urge to retire is suddenly supplanted by a pressing desire to snap some pictures. I change course for Baker Tower, stepping through the snow in my most-certainly-not-winter-boots, turning up Tuck Drive to see the bell tower enthroned luminously before the horizon, standing out like a sentinel in the dark, clouded sky. Standing in awe, the fact that it's only days before my departure brings me to sigh; it's the end of fall term – which is certainly evident in the exchange of autumn’s colors for winter's white shroud – and classes wouldn't resume for another six weeks. Truthfully, in that sleep-deprived 3AM moment, I attempted earnestly to formulate excuses to remain on campus, knowing somewhere in the back of my head that my family would never forgive me. 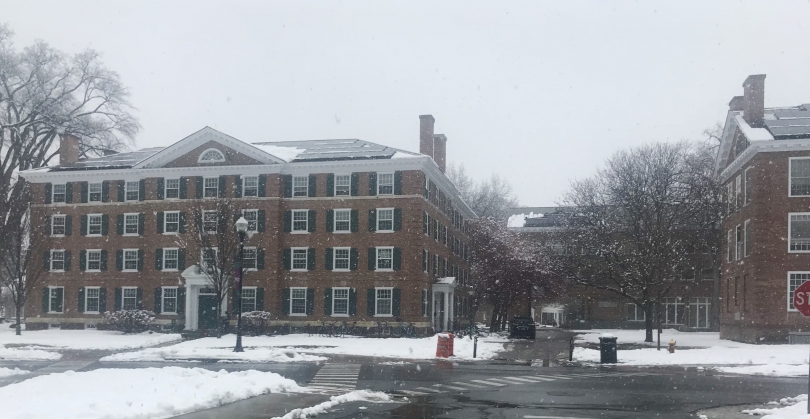 Winter, maybe contentiously, is definitely my favorite season in Hanover. It certainly takes getting used to for those from warmer climates, but it rarely takes long for them to come to grips with its overwhelming beauty. Also, it’s always a joy to see the reaction from those who have yet to witness a falling snowflake, which from experience is almost persistently proceeded by an impromptu snowball fight. If throwing snow sounds exciting, then there’s even more in store: each year there’s so happens to be midnight snowball fight on the Green, announced by a campus-wide email from Dr. Seuss. Usually it takes place after the first snowstorm, so this year it happened to coincide with finals period.  If you ask me, I don’t think there’s an imaginable better study break than pelting friends and strangers with snowballs, but that’s coming from a lifelong New-Englander.

All and all, I think the biggest takeaway is that snow certainly isn’t anything to be afraid of; just one winter here and I’m sure that anyone would have their own awestruck anecdote to share. Hanover is truly beautiful in the snow, not to mention lots of fun, and the only prerequisite is a good pair of winter boots.